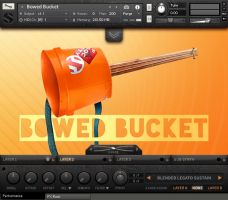 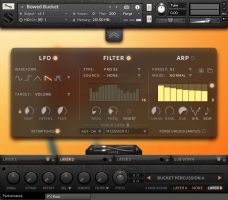 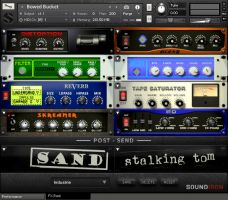 Soundiron has announced the release of Bowed Bucket 3.0, an experimental string and sound-design library for the full version of Kontakt 5.5.2 or later.

The Bowed Bucket is a unique virtual instrument built from an orange 5 gallon bucket, a wooden 4x4 beam, and cello strings. Bowing the strings produces an oddly clean and rich sound, similar to an electric cello. This library's articulations include blended legato sustains, staccatos, vari-speed staccato repeats, FX, as well as the "Bucket Percussion Ensemble".

Bowing the strings produces a surprisingly clean, yet rich and beefy sound, with plenty of growl, low end, and a nice clear bite. Its sound is a little similar to an electric cello, but with a unique rawness and body. For the percussion, Soundiron captured various bowed articulations from both inside and outside of the bucket. And of course, as a bonus, they've also created a variety of cool lead, pad, ambient droning and FX presets to expand your creative options.

The Bowed Bucket is intended for composers in need of uncommon instruments and sonic colors. This library also comes with a large collection of hand-crafted atmospheric pads, ambient textures, and 20 custom sound-designed factory presets.

Price: $29 - It's on sale for $19 until June 18th Midnight PST at soundiron.com/products/bowed-bucket

The full retail version of Native Instruments Kontakt version 5.5 (or later) is required.

Bowed BucketStrings
by Soundiron  $29
Add A Review My KVR

Beatskillz up to 40% off sale

Strix Instruments Summer Sale - Up To 92% Off

Plughugger offers 60% off “Distorted Evolution 5: Hits & Booms” for Omnisphere and 50% off “Nanopolarity” for Pigments 2See All #KVRDealsSee All KVR Marketplace Deals