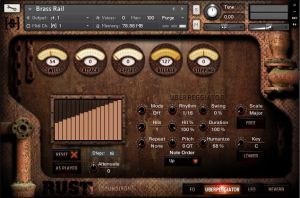 Soundiron has released a major update for the Rust 1 metal percussion collection for Kontakt. Originally released by Tonehammer in 2008, this newly updated and expanded 2.0 version includes refined key mapping and zone placement, velocity layering, randomization, tuning and more. Soundiron has added a full range of user control features and freshly refined and extended the sample content. With 2724 samples, 1.74 GB of content, a total of 19 instrument categories and over 100 sound sets, Rust 1 is designed to be comprehensive, creatively inspiring and work well within any musical or sound design genre.

To celebrate, Soundiron is partnering with Pulse Controller for the official Rust 1 Demo Writing Contest. It runs until October 5th, 2012, and is open to all existing and new owners of Rust 1. Users can upload any song they've created using Rust 1 as a lead instrument. The Soundiron team will then select three winning song entries as new official Rust 1 demos. Each winner will also receive a free Pulse Surface Controller System. The Pulse Controller is a unique hardware MIDI drum trigger and software interface that turns literally any surface into a responsive and organic MIDI controller. It also offers arpeggiation and scale progression that can work equally well with melodic and percussive instruments alike. Note: Pulse Controller is currently only compatible with Intel Mac OS X 10.5 and later. Scroll down below to check out a full video demonstration of the Pulse Controller in action with Soundiron instruments.

The Rust 1 collection focuses on classic metallic artifacts and found sounds such as metal racks, paint cans, soda cans, magnetic balls, steel pipes, brass hardware and musical saw, along with large structures like mine shaft gates, steel tunnels, towering stairways and massive structural I-Beams. Some objects are roughly tuned to a musical pitch, while others are more naturally percussive. While some instruments were recorded in halls and studios, many of these naturally captured sounds were recorded out in natural and industrial environments.

The user interface provides real-time control over every detail of the sound. The Uberpeggiator system allows adaptive arpeggios. Most presets also feature tempo-syncing resonant filter and volume LFOs, parametric EQ and convolution reverb effects, with 50+ room and FX impulses to choose from. The Mega Mixer graphic interface allows the user to select and dynamically load any of the 100+ percussive instruments into 10 independent modules, with custom key-range, tuning and mapping. This allows custom ensembles, drum kits and tuned percussion orchestras to be created quickly. The Tuned Selector presets provide instant access to each collection of solo elements, with multi-layered sonic blending. The standard ensemble presets lay it all out in a convenient full ensemble array. The Rumbones sustains provide atmospheric textures crafted from the raw source recordings, with layers that can be blended and played with simulated polyphonic legato.

Video of the Pulse Controller in action with several Soundiron libraries: youtu.be/a4CSIPGAFIE

Just bought this last night as an early first part of my birthday gift :-) Definitely gonna enter something in the contest by Friday.