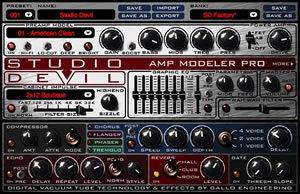 Studio Devil Amp Modeler Pro is what you get when you take Gallo Engineering's tube-modeling tone engine, bundle it with a super-efficient cabinet impulse convolution modeler, and throw in killer studio effects. Audio Units and VST for Mac OS X and Windows will be released first with an RTAS version release date TBD.

The VGA v1.4 and VBA v1.1 updates include improved knob behaviour, CPU efficiency improvements and miscellaneous minor changes. You may have to reactivate once installing these updates.