Submersible Music has announced that it has started shipping version 3.0 of DrumCore. It is being shown daily at the Best Service booth (Hall 5.1 A71) at this week's Frankfurt MusikMesse show. DrumCore 3 sports a new "Sunburst Finish" user interface, over twice as much content and is now a plug-in (RTAS/AU/VST).

DrumCore gives songwriters and composers access to grooves and instrument sounds of over a dozen famous drummers and percussionists. It includes a library of both audio loops and MIDI grooves plus a software drum instrument for Mac and PC. DrumCore covers a multitude of styles – including rock, blues, country, metal, prog, alt-rock, pop, jazz, urban, funk, Latin, reggae and others. 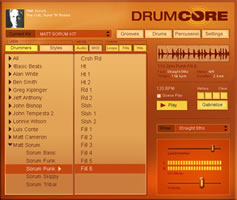 New "Sunburst Finish" Interface
DrumCore v3 features a new "sunburst" user interface with a number of enhancements. Now it's even easier to search and audition the vast number of grooves in DrumCore using List View in the updated Groove Browser. Creating more authentic drum parts is easier as content is arranged into song-like GrooveSets, that group related loops, fills and variations together. New v3 content features a larger number of intros and endings in addition to the usual verse/chorus variations. It supports searching via metadata that includes drummer, musical style and "Feel" including shuffle, swing, 1/8th, 1/16th, etc. Drag and drop export of audio and MIDI to a track is supported with all popular music/recording applications (including Acid, Cubase, DP, GarageBand, Live, Logic, Pro Tools, Reaper, Sonar, Traction, etc.).

RTAS/AU/VSTi Compatible
DrumCore v3 is now a plug-in for easier integration with all the popular recording applications.

DrumCore Toolkit
DrumCore Toolkit is a standalone application that can be used for importing your audio and MIDI loop libraries as well as for building drumkits using WAV or AIFF files. It is also great jamming with the grooves in DrumCore or for using live with a controller.

DrumCore costs $199. An upgrade to version 3.0 is available to all DrumCore customers for $50 via submersiblemusic.com and music software resellers worldwide. There will be no free upgrades.

Example drum tracks, videos and more demos will be available at the company website.