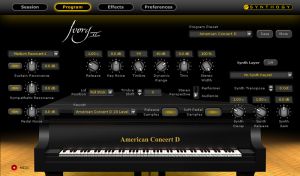 Ivory II-American Concert D has an MSRP of $199 and is available for 32- and 64-bit Windows and mac OS X in VST, AU, RTAS and AAX plug-in formats.

In the rarefied world of great concert artists, there are precious few instruments that leave a lasting impression upon the masters who played them. Ivory II-American Concert D is one of those instruments.

This vintage 1951 New York Steinway D (CD 121) was chosen by the Steinway & Sons concert department for Steinway artist promotion. Throughout the years, the instrument has been lauded by some of the world's greatest concert artists. Indeed, the plate of the piano is signed by Glenn Gould, Rudolf Serkin, and many others, as a testament to high praise by the world's great masters.

The instrument itself has an exceptionally clear and transparent sound, yet with a singing tone and mature beauty and resonance that can only be found on a concert instrument in this class. The recording took place in the Françoys-Bernier Concert Hall at Le Domaine Forget in the Charlevoix region of Quebec, the same hall where Synthogy recorded the German Steinway from Ivory II-Grand Pianos. Reunited were master concert technician Michel Pedneau, performer/producer Joe Ierardi, and recording engineer, Mark Donahue of Soundmirror to capture every detail of this revered instrument.

Producer, and Synthogy co-founder, Joe Ierardi comments, "I'm particularly proud of what we've accomplished with Ivory II-Amercian Concert D. Even with all of the technological advances of recent years, the level of success of a virtual piano really comes down to the quality of the original instrument, and the talent of the production team. We've been able to leverage a lot of experience and expertise to create these samples, and George Taylor's work on the Ivory II engine really puts the finishing touch on what we hope will be our most successful piano yet."

With a 49GB library, Ivory II-American Concert D is the largest single piano in the Ivory family. This American Steinway possesses a naturally long sustain, which is captured in its entirety to the final decay with some of the notes ringing longer than two minutes. It also boasts more detail than any other piano from Synthogy, with up to 20 velocity levels, more soft pedal samples, and more release samples.

Ivory II-American Concert D is powered by the Ivory II engine, and contains the full compliment of Ivory II's features, foremost being Synthogy's Harmonic Resonance Modeling for the realization of true Sympathetic String Resonance. This technology does not rely upon triggering additional samples or use ordinary sine waves. Rather, struck notes that are harmonically related excite the actual complex overtones of the notes that are being held, in the same manner that undamped strings resonate in a real acoustic piano.

Ivory II-American Concert D is a free-standing virtual instrument that works as a plug-in on Mac and Windows for VST, RTAS, Audio Units and AAX hosts, in addition to stand-alone. No previous version of Ivory is required. Ivory II's "unified interface" feature enables customers to use just a single instance, and one interface, to play and control all of Ivory's pianos, no matter how many Ivory II pianos are installed. Ivory's intelligent browsing feature let's users load all pianos from one convenient interface. All Synthogy products require iLok (sold separately).