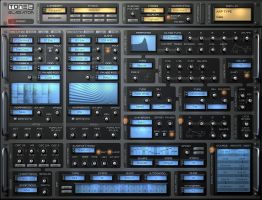 It will include a larger and resizable GUI, a patch browser, enhanced sound quality, a bigger sonic range, a more user-friendly interface and many new features.

Gladiator3 is downward compatible. Existing song-projects and patches can be loaded without any further steps necessary. They will benefit from the enhanced sound quality.

The update to v3.0 will be released in Autumn and free for all Gladiator2 users.