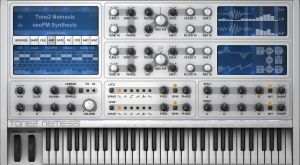 Tone2 Audio has updated their digital synthesizer Nemesis to version 1.6. It includes new effects, enhancements for the user interface, a more harmonic overall-sound and some fixes.

Nemesis 1.6 is 100% downward compatible with all previous versions. All existing song projects and patches can be loaded without any further steps necessary. They will benefit from the enhanced sound quality.

Price: $199. The update is available for free. Tone2 is currently offering a sale with 50% discount.

Find Nemesis in the KVR Marketplace