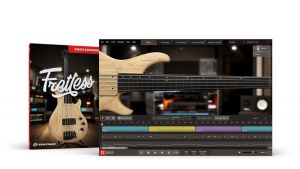 Toontrack has released Fretless EBX, a new expansion for the company's bass software EZbass. Here's what they say"

At a glance, one wouldn't think that removing the seemingly insignificant metal rods that separate the notes on the fretboard of a bass would open up a completely new harmonic panorama and transform it into an almost altogether new instrument. But it does, indeed. The sublime and soaring violin-like character, the near-weightless glissando, the rich, full and hearty sustain and the incredibly unique overall expressiveness are all qualities that make it utterly impossible to mistake it for a traditional bass. A subtle vibrato or just the strike of a single note gives it away.

Immortalized by players like Sting, Les Claypool, Bernard Odum, Pino Palladino, Gary Willis and, of course, Jaco Pastorius, the fretless has truly become a mythical creature in the world of basses – revered for its tone but feared for its profound complexity to handle. Regardless of what style you're looking to write, welcome to a bass that encompasses the entire dynamic and tonal range needed to cut through on both ends of the extremes. This is a bass that lets you paint with sound – outside the lines. Literally.

The Fretless EBX comes with a handpicked instrument, sampled in extreme detail to capture all of these unique characteristics. In addition to the sounds, it also includes a broad selection of presets as well as a custom content of MIDI tailored for fretless playing styles.

What's New @ KVR Audio
Latest Forum Posts (Customize)
Refactor (ElectroProg - Seismic Re-Animation)by seismic1 @ 22:54 in Music CafeAnyone have any new info on Tantra 2?>by Kalamata Kid @ 22:47 in EffectsRemove Locations From i-Lok Account??by cprompt @ 22:41 in EffectsMPC Live 2 fun factorby bmanic @ 22:40 in Hardware (Instruments and Effects)IK Multimedia T-racks Tape Machine Collectionby MogwaiBoy @ 22:39 in EffectsThe Waves Update Plan scamby MogwaiBoy @ 22:35 in EffectsF/S, NI Expansions 15.00 or 2 for 20 or 3 for 30.by Poppamoet @ 22:34 in Sell & Buy (+Special Offers, Deals & Promos)Say something about the poster before you.by WatchTheGuitar @ 22:31 in Off Topic ClassicsFS: Bitwig, Ableton, Izotope, Waves, Audio Assault, Arturia, Sonible, W.A Productionby Giova942 @ 22:26 in Sell & Buy (+Special Offers, Deals & Promos)2021: A Year in Gear (What You've Bought or Want to Buy in 2021)by pekbro @ 22:19 in Hardware (Instruments and Effects)Dune 3 vs Sylenth 1 vs Seum for techno/tranceby functionform @ 22:19 in InstrumentsWhat are you listening to now? Look on my works, ye Mighty, and despair!by raiderpdog @ 22:09 in Everything Else (Music related)Why do most DAW browsers suck?by aMUSEd @ 22:08 in Hosts & Applications (Sequencers, DAWs, Audio Editors, etc.)Tranzistow/Diodow Programming, Display, And Other Tipsby Mumdad @ 22:06 in InstrumentsFeedback Threadby pbanach @ 22:05 in Sell & Buy (+Special Offers, Deals & Promos)View All Latest Posts