Toontrack Music has announced the release of EZmix, the next product in the Toontrack Software Tools line, developed by Toontrack in collaboration with Overloud. 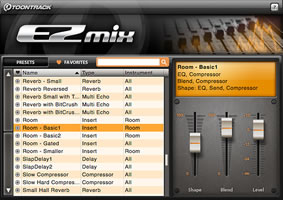 EZmix is a simple (EZ), yet powerful, mixing tool that gives you access to a huge array of mix presets for the whole gamut of mixing needs. Whether you need to mix drums, vocals, guitars, bass or keyboards this is your tool.

Simply connect EZmix to a channel strip in your sequencer like you would any plug-in, pick a preset for the instrument or sound on that strip. Done. For demo purposes or in full on production EZmix will cut your studio time, speed up and enhance your creative process from the initial hook to the final track.

EZmix costs €49 and is available for Mac OS X and Windows in AU, RTAS and VST plug-in formats delivered with a wide variety of mix presets, with a heavy accent on your drum mixing needs, designed by Toontrack Music Head Of Sound Design Mattias Eklund.

EZmix 2Mastering
by Toontrack Music     €139
Add A Review My KVR