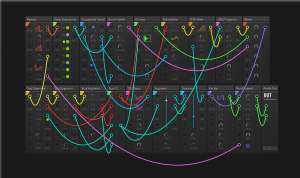 Toybox has released Nano Pack 2. The updated pack includes over 150 brand new blocks for Reaktor Player as well as many improvements and fixes.

New blocks added to V2 include:

A full list of changes can be found here: toyboxaudio.com/pages/please-notes

The pack can be purchased for a limited time for $45 (30% off), the update is free for existing users.

More information on Nano Pack 2 can be found here: www.toyboxaudio.com