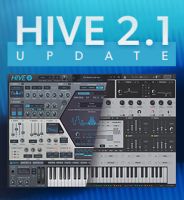 u-he has announced that Hive has been updated to version v2.1, which comes with four new filter types, support for the latest Apple macOS and M1 hardware, 100 new presets, an alternative skin by Plugmon and much more.

The added filter types are various flavours of comb including polyphonic reverb as well as a sideband filter for ring-mod-like effects and other complex tonal colours. You can use the new filter 'Spread' (hidden parameter) to create immersive stereo in all filter modes, and the extra modulation source 'Mod Noise' lets you inject swirly organic magic into the cleanest of patches... try modulating one with the other.

The browser now features 'Bank' folders, which already list the factory presets by origin (the 100 new presets appear in the "Hive Factory 2.1" bank). Users can create custom banks via drag & drop, for instance all the Hive sounds you have used in one particular track.

Other workflow-related options include Scope viewing of modulation matrix outputs and the radically different alternative skin by Plugmon called 'Izmo'.

Hive now supports macOS Big Sur and the new M1-based Macs. As these developments dropped 32-bit support, so has Hive 2 on the Mac.

Changes in version 2.1 include:

To update Hive 2 from an older version, download the installer from the product page and follow instructions on page 4 of the included user guide.

This update is free for all current Hive 2 owners.