Ugo has released Dualism v1.0 and updated M-theory to v1.1 - Dualism is a plugin version of the programmable dual phrase arpeggiators and 2X in M-theory, allowing you to use them to control other software and hardware synths. Dualism is included in the 1.1 update so it is also free to all current M-theory owners. 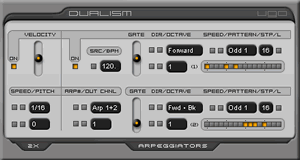 Dualism is a plugin version of the dual arpeggiators and 2X MIDI utilities found within M-theory and, as such, provides you with the ability to arpeggiate/double any other synth you wish, including hardware synths.

Combining two flexible and programmable phrase arpeggiators with a pitch and speed controllable MIDI doubler, Dualism allows you to create arpeggiations that are far more complex and detailed than your standard synth arpeggiator. However, all this flexibility is contained within a small and straightforward interface, letting you quickly and comfortably create complex patterns without having to feel slowed down but the UI.

The 1.1 update for M-theory is free to current M-theory users and includes a bunch of new features and improvements.

Other tweaks, fixes, and slight improvements in clarity:

1.0 presets are still compatible with this update, however when loading your own presets (or songs made with 1.0) you will likely get an error message saying something to the effect that data was not found for all parameters. This is only because old presets did not have data for new controls. The presets will still load fine though and you just have to resave them to get rid of that warning message. The banks that come with M-theory are already updated.