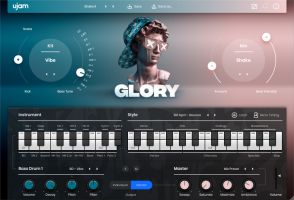 UJAM has announced the release of Glory, the ninth addition to their Beatmaker line.

Beatmaker Glory is the virtual beat maker for all kinds of trap and modern hip-hop: where 808-kick drums meet hi-hats at the top of the billboard charts – simply put, the angry equivalent to Kandy. The drums are carefully sound designed to give users that production-value-feel right out of the box.

Glory is available now in VST, AU 2 and AAX formats also as a free, fully functional 30-day trial at ujam.com.

Glory is now available at ujam.com for an introductory offer of 49 EUR / USD, owners of any Beatmaker get a special loyalty offer of 29 EUR / USD until June 13th. After that, the plug-in sells for 69 EUR / USD.

The bundle of nine Beatmakers including Glory, Nemesis, Kandy, Hype, Eden 2, Dope 2, Hustle 2, Vice and Void is available for 389 EUR / USD (instead of 621 EUR / USD for the single products).

All Beatmaker plug-ins can be downloaded in VST, AU 2, and AAX formats for any compatible DAW, including Logic, Garageband, Cubase, Ableton Live, Pro Tools, FL Studio and Studio One. Free, fully functional 30-day trials are available.