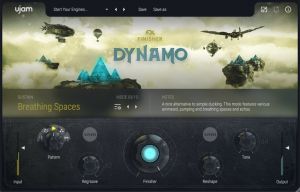 UJAM has announced the release of Finisher Dynamo, the company's sixth addition to their series of virtual multi-effects that are designed to combine the power of an entire effect rack with the ease-of-use of a single plug-in.

With Finisher Dynamo you embark on a journey through animated soundscapes and surreal vibes beyond the realm of the ordinary.

The Bundle of six Finishers including Dynamo, Retro, Fluxx, Voodoo, Neo and Micro is available for 299 EUR / USD (instead of 495 EUR / USD when purchasing individually).

Owners of any Finisher (excluding the free MICRO) are offered a special loyalty price of 49 EUR / USD during the introduction period ending October 31st, 2021.

All Finisher plug-ins can be downloaded in VST, AU, and AAX formats for any compatible DAW, including Logic, Garageband, Cubase, Ableton Live, Pro Tools, FL Studio and Studio One. Free, fully functional 30-day trials are available.