Introduced in 1982, the KORG SDD-3000 Digital Delay was popularized by U2 guitarist, The Edge, to forge one of the most identifiable guitar sounds in the history of rock. The SDD-3000 also found a home in early new wave and 80's synth music, as well as heavy use by producer/guitarist Daniel Lanois and producer William Orbit.

Developed by Softube, and available exclusively for UAD hardware and Apollo interfaces, the Dytronics Cyclosonic Panner plug-in is an emulation of the rare analog auto-panner introduced in 1984. Famous for deep panning and modulation effects, and imparting instant vibe and stereo character to any source, the Dytronics Cyclosonic Panner plug-in's bi-directional "Round Sound" panning yields a 3D sound stage. 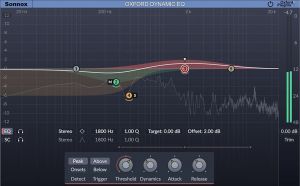 Developed by Sonnox, the Sonnox Oxford Dynamic EQ plug-in for UAD hardware and Apollo interfaces offers high-level control over the frequency content of audio, helping tackle the most demanding production challenges during mixing or mastering.

The first dynamic EQ on the UAD platform, the Sonnox Oxford Dynamic EQ plug-in is an excellent alternative to multiband compression, allowing producers and engineers to sculpt and shape sources with unending precision.

Developed by Brainworx and available exclusively for UAD hardware and Apollo interfaces, the ENGL Savage 120 Amplifier plug-in captures all of the punishing, beastly punch of ENGL's most diabolical high-gain amp. The ENGL Savage 120 plug-in not only captures the intense crunch and distortion of the original amp, it adds 100 high-end recording chains as well as onboard vintage delay, noise gate, and lo/hi pass filters for further tone shaping.

The AMS RMX16 was the world's first microprocessor-controlled, full-bandwidth, digital reverb. From U2 and Peter Gabriel to Radiohead and Rihanna, the unique and lush reverb programs of the RMX16 are instantly recognizable.