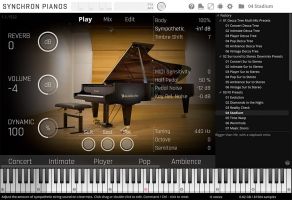 The Vienna Symphonic Library has released Bösendorfer 280VC, a virtual representation of Bösendorfer's new "Vienna Concert" grand. The instrument was captured at Stage B of Synchron Stage Vienna from seven microphone positions and comes with Vienna's powerful and free Synchron Piano Player.

Heralded as the next-generation concert grand, the 280VC has already proven to be a true all-rounder. Compared to the Bösendorfer Imperial with its additional bass strings, wider soundboard and more orchestral sonic character, the sound of the 280VC is very distinct and clear. You can easily differentiate between the bass, tenor, and treble sections. Beyond that, its huge dynamic range makes this concert grand very versatile. It has the necessary sensitivity to offer supportive accompaniment to singers and solo instrumentalists in chamber music settings, while at the same time it holds its own against the power of a large orchestra in a huge concert hall. In addition, the 280VC boasts the qualities of all Bösendorfer concert grands, such as its diversity of sonic colors and that certain warmth inherent to fine Viennese instruments.

The Bösendorfer 280VC was recorded at Synchron Stage Vienna's Stage B, a 739 sq ft. live room offering a beautifully controlled acoustic environment with less ambience than the facility's large main hall. Hence the sound of the 280VC is more intimate and direct than the Stage A recordings of the Bösendorfer Imperial, with ample body and fullness, making it a more genre-versatile piano that's easy to control and fun to play.

I am truly astonished that in modern piano crafting there – still – is potential for further improvements. Without abandoning the legendary virtues of Bösendorfer, this instrument captivates with its extremely rich resonance and dynamic spectrum – absolutely brilliant.