With intuitive controls that are inviting and enjoyable to use, MetaFilter allows users to effortlessly customize and program their own presets, and due to its easy-to-use MIDI Learn capabilities, the plugin can be controlled from any MIDI control device, perfect for live DJ performances. Moreover, when connected to a MIDI keyboard it can actually be utilized for playing the filter cutoff.

Whether it's used for creating rhythmic loops and tracks from sound bites, adding a subtle effect to a guitar part, or simply mangling a vocal track just for the fun of it, the endless possibilities and versatility of the MetaFilter make it an essential tool for creating and producing innovative, eccentric and cutting-edge music, in the studio and on stage. 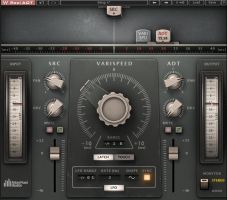 ADT was the signature effect created at Abbey Road in the 1960s to meet the requirements of some very special clients: The Beatles. It is the most legendary of all Abbey Road tape effects and can be heard on countless historic recordings. Over the years, many recording engineers have tried to replicate the effect, but only with partial success. This is largely because a definitive description of the exact process used at Abbey Road has, until now, been a closely guarded secret.

ADT was invented to meet the Beatles' unique recording needs. As the band's success grew, so did their desire to find new ways of working, leading Abbey Road's engineers to experiment with new technology. By 1966, the band had become frustrated with the need to continually re-record vocals to create multi-layered vocal effects. To solve the problem, Abbey Road engineer Ken Townsend created Artificial Double Tracking (ADT). By connecting the primary tape machine to a second, speed-controlled machine, two versions of the same signal could be played back simultaneously. And by gently wobbling the frequency of an oscillator to vary the speed of the second machine, the replayed signal could be moved around just enough to make it sound like a separate take. The introduction of ADT was a milestone in the history of sound recording, and the technique was used heavily on many recording sessions at Abbey Road Studios. John Lennon reputedly dubbed it "Ken's Flanger," which some say led to flanging becoming established as a technical term in studios around the world.

Reel ADT puts the magic of that era in your hands within seconds. Using its intuitive controls, you can advance or delay the doubled signal to achieve genuine delay and pitch variations. You can also drive each of the signals separately to add beautiful tape saturations. With its authentic modeled tape sound and faithful emulation of wow and flutter, this extraordinary plugin can enhance any track with the impression of two separate takes, giving you the closest possible results to real double tracking. All the character, depth and panoramic sound of this inimitable classic effect can now be created digitally, simply and for real: Reel ADT.

Mirek Stiles, Head of Audio Products, Abbey Road Studios, states, "From my time as an assistant engineer, I remember the setting-up of ADT as being a lengthy process, but totally worth it. Not only hearing, but also controlling ADT for the first time was amazing. Using the remote vari-speed on the tape machine, it was possible to add lush movements, stereo width and dramatic depth to almost any track. For the first time ever, Waves has captured not only the true sound of ADT, but also the feel of this classic effect."

Waves MetaFilter is now available with U.S. MSRP's of Native $200 and SoundGrid $299. Both are now available at special introductory pricing of $99 (Native) and $149 (SoundGrid).

The Waves Abbey Road Reel ADT is Native only. Pricing hasn't been announced.