whiteLABEL (Rough Diamond Productions) has announced the release of several new plug-ins (and an update). All are available for Windows as VST effect or instrument plug-ins. 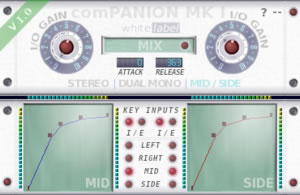 disPRESSA [£10]
A mono version of disPRESSA is available for free (the full version is stereo).

disPRESSA is a distortion powered compressor. It's not a normal math modelled compressor - no threshold, ratio, or knee controls. Instead, disPRESSA uses overdrive as its method of compression. The input channel is overdriven and then measured. Its level is then used to set the level of the clean output channel. The more distortion is piled on, and the higher the contour control, the more the signal is compressed.

It has controls for:

comPANION [£15]
A free version that stops working for 5 seconds every 5 minutes is also available (the full version doesn't do this, obviously).

comPANION is a compressor / expander / dynamics tool with graphic envelopes. You can redraw the dynamic of your source by dragging on the screens to create the desired shape.

stwETCH [£10]
A mono version of stwETCH is available for free (the full version is stereo).

stwETCH is a playable granular time-stretching / buffer repeater effect capable of stretching up to 500% normal length using granule sizes ranging from 10 to 500 ms, meaning that relatively smooth and total whack-job are both possibilities here. Further to this there are 2 pitch controls: one that controls granule playback speed, aka speed control (like tape), and one that controls pitch-shift, aka pitch (like a pitchshifter).

stwETCH was designed as a control surface playable instrument - in a similar vain to wavePLAY. It is entirely monophonic and whilst it has MIDI support, it won't respond to any plain old note-on data. stwETCH wants nothing but CCs - even the play switch. So, play it from a control surface (or VST automation parameters) or use MIDI CC - just don't expect it to respond to you playing the notes on a keyboard.

monoLOW [£15]
A free version that stops working for 5 seconds every 5 minutes is also available (the full version doesn't do this, obviously).

monoLOW is a "low band conformance machine". monoLOW is just about the simplest tool going. The lower its frequency, the more a sound loses its directionality. It sometimes makes little sense for frequencies below a certain point to be spread across a stereo mix - a stereo bottom-end can cause a loss of focus. Enter monoLOW.

2 simple controls allow mono-izing of the low band: "frequency" below which all is mono, and a "cut / gain" control for level. Audition and defeat buttons are also present.

simpleTON [£10]
A mono version of simpleTON is available for free (the full version is stereo).

simpleTON is a dual filter with distortion.

autoBED has been updated to version 1.2.