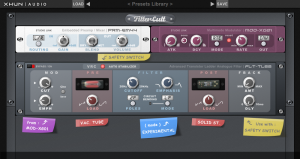 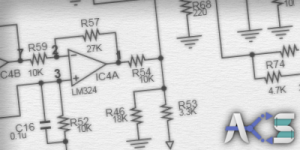 FilterCult is an analogue modeling simulation of the infamous and iconic transistor ladder analogue filter, preserving its original circuit topology, behaviour and quirks.

Moreover, the addition of circuit-bending modifications and the possibility to use supplementary nonlinear electronic components sensibly expand its sound sculpting possibilities, making it able to produce from smooth and gentle analogue filtering up to extremely aggressive colorations of any audio material.

FilterCult is an effects processor composed of three different devices arranged in a rack. Playing the leading role in FilterCult is the FLT-TL22 device, an analogue modeling simulation of a transistor ladder filter. In order to make this analogue filtering unit well-suited for a wide range of use cases, a meticulous preservation of the original circuit design and physical properties was just the beginning.

A series of experimental circuit-bents and improvements have been added, including a device-level feedback path (with the possibility to delay the feedback signal), extra pre-filter and post-filter nonlinear components (using transistor-based or tube-based technologies), a poles selector (by connecting different nodes of the analogue circuit to the main device output), a high-pass path and more.

Controlling the analogue filter cutoff and emphasis (resonance) parameters, the MOD-XG01 unit is a multi-source modulation device, integrating an envelope generator, a multi-waveform LFO with tempo-sync and a noise generator.

This extended features set makes FilterCult suited for use in channel strips or as a master effect processor, filtering the incoming audio with its gentle analogue touch, drive and presence. Or, by rising up the internal nonlinear components operation, feedback paths, self-oscillation and modulation amounts, FilterCult is capable of deep and wild signal alterations, bringing powerful electric-esque, bassline-ish colorations - specially on rhythmic, percussive material like drum loops.

Price: 59 €/Euro from the online Xhun Audio shop. During the first weeks of its release there's a special introductory offer with a 50% discount, so FilterCult can be purchased for 29.90 €/Euro.