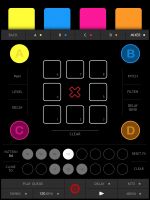 Zaplin Music released their music app triqtraq on the iPad today. Existing users of the iPhone version can update the app to version 1.5 for free.

The new iPad layout takes advantage of the larger working area and has been optimized for live jamming. Patterns can now be recorded, played and arranged in the same window, which allows for an extra fast workflow.

With the new audio export option "Open In...", users can export their tunes to apps such as Dropbox.