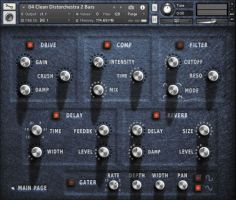 This library was crafted by Professor of Sound Design and Hollywood trailer sound professional Alessandro Camnasio, whose credits include the trailers for Transformers: Age of Extinction, Captain America - The First Avenger, Thor and many more.

Included are over 90 presets themed in sections such as Clean, Dark, Vast, Distorted, Dead Stops and Falls. Added to this is a Kontakt Interface which allows for sonic manipulation and lets a user mix and match different sounds, change their volumes, randomize the sounds, change the length of the rise, the pitch, EQ, the envelope shapes, filters and send effects (delay and reverb).