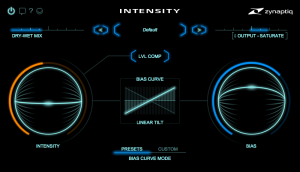 Zynaptiq has announced the immediate availability of Intensity, a new kind of audio processor for mixing, mastering and sound design. Built on techniques typically found in facial recognition algorithms, Zynaptiq say Intensity brings out a sound's inherent detail, increases its perceived loudness and density, and adds what they describe as "maximum clarity".

The unique algorithm carves out important signal features – making sounds sound more like themselves – and is operated with essentially one control. Between the proprietary algorithm and an optional soft-knee saturating limiter in the plug-in's output stage, Intensity also excels at attaining maximum loudness and creating a beautifully aggressive tone.

The key Intensity features at a glance:

"You can think of it like an infinite-band compressor that threshold-less-ly operates relative to the input – whose time constants are zero, and which is controlled by an artificial intelligence at audio rate – making it possible to adjust the process with essentially just one knob." said Zynaptiq CEO, Denis Gökdag.

"That said, it is absolutely *not* a compressor, it's "rocket science". But the analogy does give you an idea of when to use it and what for. Or in plain English: Intensity is the closest thing to an "AWESOME-Knob" we've come up with so far. Put it on everything, all the time – it is quite addictive."

* All prices in EUR are quoted inclusive of 19% German VAT

Find Intensity in the KVR Marketplace