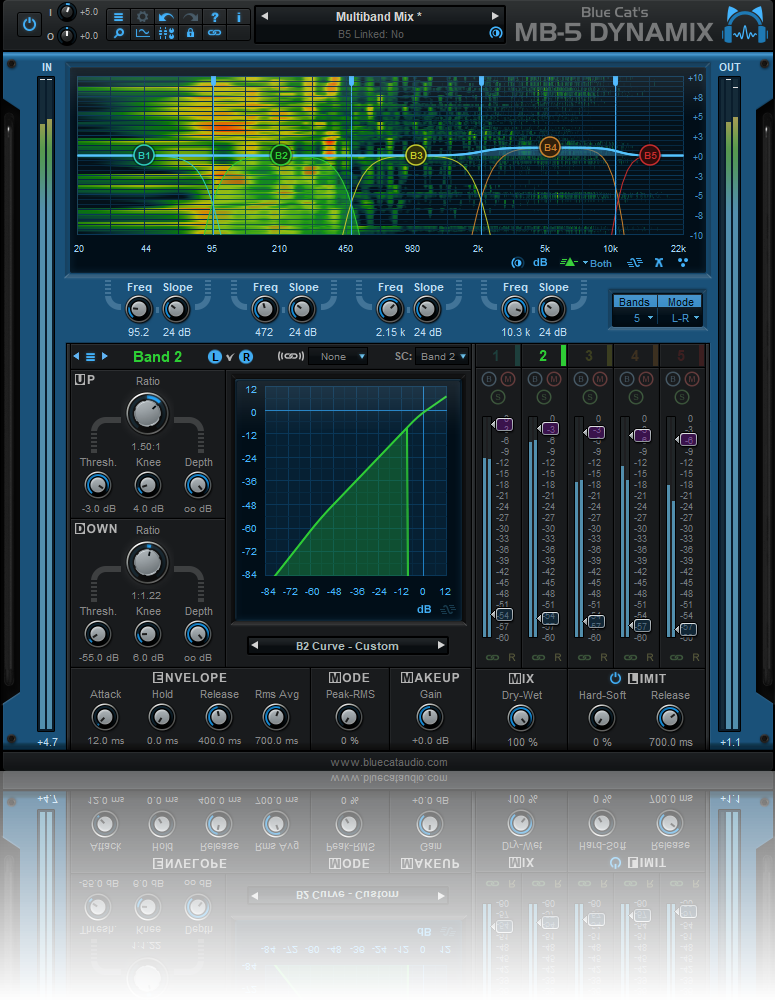 Blue Cat's MB-5 Dynamix is an all-in-one multiband dynamics processor that can act as a multiband compressor, limiter, expander, gate or waveshaper. It offers up to 5 separate bands and all types of effects can be combined together. Its advanced internal side chaining capabilities enable unique interactions between spectral bands or audio channels. This results in finer control of the dynamics response and unprecedented flexibility. The plug-in offers premium visual feedback about its internal processors thanks to several real-time meters and curves.

One could quite logically ask the question whether the world needed another Multi band compressor plug in . The fact that the MB-5 has stayed under the radar certainly points to some sort of "MB comp FATIGUE syndrome " or something like it !!! I admit that my first reaction to the news of this processors release was less than a hardy "Meh" !!

But having used some of this developers other plugs , I definitely thought it would be worth it to see what was on tap because Blue Cat definitely has a way of providing functionalities that others never get around to !!

Let me start out by alerting the reader that Blue cat has had a broadband dynamic processor for quite some time and has been constantly refining it. What this means is that when they finally decided to go for a multi band version , they weren't starting from scratch ......


I basically was trying to avoid getting anymore plugs , and wasn't initially impressed with the ability to use the detector feed from one band to drive the dynamics processing in another band ...( side chaining between bands ).

After all , usually you turn to a multi band when you are trying to avoid having signals in one part of the spectrum cause unwanted modulations in another ( inter-modulation distortion ) .


But once you dig into the details and examine some of the presets you might have an "a ha" moment !!

The plug has expansion as well as compression , and has mid/side capabilities.

This is where the plug excels! How about having they sides of the upper band ( AIR) expanded by the mid signal spectrum's side chain ?? A frequency dependant target reacting from/to a specific targeted source... all within the plug itself . There are allot of possibilities to explore .....

Any plug of this sort is going to be muy busy .. some of the controls are a little smallish , No deal breakers though.

Because this dev gives you lots of adjustments , you really have to move beyond the preset hopping mode here . ( not that that's a real viable thing with dynamics plugs to start with !!)
you can add anything from grunge to distortion if you need it . Does it sound holy grail analog-ish?? I couldn't tell you , and thats so much fairy dust subjectiveness anyhow !! It sounds good to me !!

You have the unique ability to mix peak and RMS in the envelope follower/detection circuit .... very useful .

Basically you will be able to find the sounds ... and many , many of them . But you'll have to be a little more persistent and give it more thought sometimes ....

Have you been paying attention ??? features in spades!

It's all there , but don't expect much hand holding here . This isn't an overly noob friendly document.... The Dev trys and has very much improved in this area but , at least for me , I can't give an overly high rating in this category ... The great coder may not be a great communicator in PDF format !! You do have the option of some on-line tuitorials , though not numerous.

What can I say?? There are some very interesting ones given the capabilities of this plug . Expecting allot of spot on presets in a compressor is pretty futile.

The cost benefit ratio is great ... It's just not blatantly obvious!

No crashes here; ever .

If your wanting a super capable Multi band compressor/expander look no further!Read more