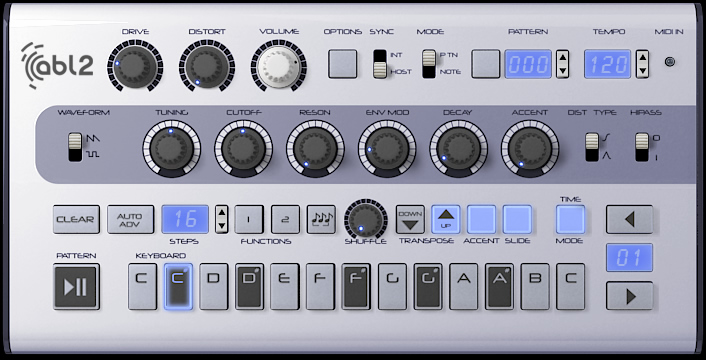 Bass Line is kind of a new version of Freebee, the free stand alone 303 emulation, although the engine has been rewritten from scratch and features an improved filter and control signal model.

GUi & Usability
*******************
Simple and very easy to understand GUI. And you can swap to another darker skin. Most of it is very self-explanatory. 303-user will know what to do. New user to 303, will have to learn the sequencer, but it's not big thing. That's why the 303 is (among other things) so sought after. It's just very easy to get groovey sequences out of it in an instant.
The contender Phosycon from D16 has worse usability. It was confusing to me, so I wasn't able to start a sequence within one minute. But that's probably jus me ;)

Load the ABL 303 and start right away by hitting a note on your keyboard. Hit another note and listen to the next sequence.

It even supports 303-audio-file-import and recognizes and implements that pattern. I have to admit I've never tested that feature, so I can't really say how good it works.

Sound
*******************
The sound is as you expect it from a 303. Pretty authentic, but surely not like the real deal, because a real 303 hooked up to some fine high end analog gear will still punch better.
Then there is also Phosycon, which I think has a slight better sound, but the ABL has just a better usability for me. I believe the slight sound differences won't matter in songs, that don't build upon the 303 as a main instrument (like Acid).
ABL also has two types of distortion built in to pimp the sound. They're good, but meanwhile there are better external ones.

Presets
*******************
ABL delivers a huge amount of presets. It's so much, that I still haven't covered one percent of it. You must know, that every preset can have multiple sequences triggered by a note. There are presets for all kinds of styles. Straight bangin acid lines, funky crazy grooves, driving bass lines... you won't be bored.

The Roland TB-303, what a simple instrument... Just take a sawtooth or square wave, run it through a resonant 18 or 24 db/oct lowpass filter modulated by a decay envelope, throw in some accents and portamento, and there you have it, BAM! right?

It's only by listening to the evolution of the software 303, that I've come to realize how complex and 'alive' the sound of a 303 really is. Like an accoustic, or a well programmed and featured synthesizer, there are subtle movements in the sound, and proportions that change beyond simple filter modulations.

Love it or hate it, to see a 303 as simply a waveform going through a filter is to miss the point. And that point has not been missed by Audiorealism, makers of what must be the most accurate softsynth 303 in the world today. The sound spawned countless genres and contextualizations precicely because this subtle complexity creates a sound which is compelling because it sounds alive, tangible, like a physical process.

Having played with a real silver squidgebox a long time ago, there are very few simulations that take me back to that insta-grin moment I cranked the resonance and let the acid flow. Audiorealism ABL 2 nails all of the subtleties almost squarely on the head. The way the accents bob up and down slightly, as if on the surface of a liquid; the way the main body/character of the sound changes, and not just the cutoff point, when you up the resonance; the clear, wide variation of sound, from peircing high-pitched resonant bubbles to dark, chunky rubber... need I go on?

ABL even affords you the luxury of adjusting the internal pots of your simulated 303, allowing you to supercharge or tone down the sound to fit the flavour of your current project. You can make the cutoff range go out the top of human hearing, choose between overdriven filters, or pure liquid sinewave resonance, and even simulate flaws such as the VCA clicks which occurred on every sequencer step.

One feature I really appreciate is the resonance gain compensation. In a ladder filter, turning up the resonance causes a drop in volume of overall sound, as more energy is directed into the peak and none is added. This makes extreme tweaking cumbersome in realtime, and requires either distortion or a compressor to level things out - which may not be desired. Resonance gain compensation gets around this simply by causing the oscillator volume to increase, in proportion to your resonance. Simple, but SO effective, and a welcome break from 'warts and all' authenticity :)

Many software 303's sound amazing put through a suitable distortion, but what floors me with ABL is that despite having built in distortion, it sounds amazing totally naked! Warm and authentic are words that spring to mind. Subtle distortions such as simulated filter overdrive, and the internal clipping that is caused when the volume knob exceeds 75%, create an output signal almost indistunguishable from the real deal.

I like the new GUI. It's bold and iconic without being overly nostalgic, but the option is there to skin if so desired. Features such as pattern randomization, sequencer swing, and an audio detection routine to detect the notes from a source loop, round out an amazing acid experience!

I am not an acid purist, nor am I a pure acid-head. I just consider the 303 an invaluable tool in creating electronic music, and something with instant appeal, sort of like electronic music's version of the electric guitar. ABL is the best emulation out there at the moment, and in A/B tests I, along with most other people, can't tell the difference. Whether you think this justifies the price tag is up to you, obviously...

... After all, a 303 is just a basic waveform through a resonant filter, right? ;)Read more

I love this 303 emulation. It nearly captures the bite and grittiness of the original that everything else i have experienced has lacked.
The basic waveforms of the original TB-303 always possessed something different and very special in it's basslines and this has worked really well in replicating that.
I personally don't use the Pattern Sequence thing, but you could if you wanted and it works well and sounds very like the original.
I use for Electro music, it offers instant inspiration.
Not very good for general synth use, but you will come back to it very often if you are into that kind of thing.
Excellent purchase, looking into getting Pro for that those extra synthesis options.
Sounds great when paired with your TR-808 or TR-909 samples and you're away creating the great retro sound that you'll remember from years back.
The main selling point of this is the sound and it is the best emulation I have yet had the pleasure to experience.
I use this more or less on its own and it still cuts through the mix. Just like the original!

Great value for money and works really well when used as Ableton Clips.
Extremely stable and great to use if set on loop for Live. Best emulation I've seen.Read more

I use the AudioRealism BassLine2 many months. This is the best TB-303 Clone. It is simple to programming for a great ACID-Sound. So if you need a 303 in your productions, the Basslinis VSTi is a very good investment!

You can use knobs Events very easily in host (FL-Studio,Cubase....). Programming the Pattern goes on different wise. Everyone is very simple. (Step by Step or 303 Style programming mode). You can import old ReBirth RB-338 and PH-Files (d16.pl). Preferences dialog for easier setup and great Sound.

The GUI is very simple for beginner and profis. The Sound are is great. (Little difference Hardware). The distortion effect on
the Bassline is also great. It's filters are very well simulated.

GUI - Simple and effective. All the knobs are where they should be and spreaded out thoughtfully.

Sound - If I was to blind test you with the real thing and this vst you would no be able to tell the difference!!!! Spot on!

Features - Everything you expect a 303 to do is there! However this thing does not stop there. the midi capabiliies to this are clever and the patterns just leave you in awe! Best thing is he famous pattern section. Sounds like the real songs!

Documentation - Everything you need to know is there and explained logically

Customer Support - Can't say never had to use it. Mike however does answer questions swiftly.

Value - Lets see about $3000 for the real thing or about $100 for something that sounds 99% like it! To be honest I felt like I ripped Mike off!lol


What can I say. This is one of the greatest 303 emulators out there!Wet, Juicy,fat,squelchy however you perfer that 303 to sound this thing does it with precision! The filters couldn't be anymore exact. The accents an decay are just about identical to the real thing. Every little detail and overtones are amazingly realisic!!Funny, I think Mike snuck in the Roland factory and stole the schematics!!!!Read more

Average user rating of 4.25 from 8 reviews