Beat-Sliced Guitars - WackAss by The Sound Department - Austin is Soundware (e.g. samples or presets that load into other products) for macOS and Windows. 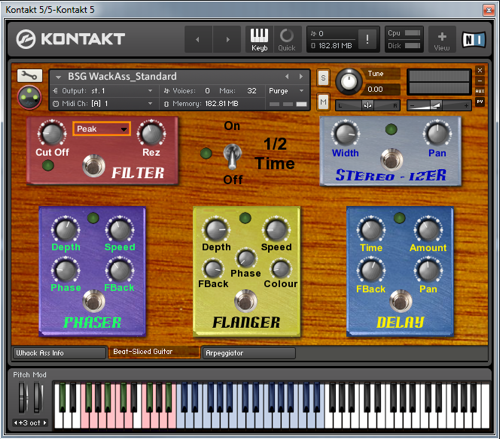 It's simple really – Beat-Sliced Guitars (BSG) are guitars played rhythmically in all the common note length variations and two playing styles (staccato and legato), sampled and sliced so that it stays solidly in time with your host. Add some Kontakt magic like effects and envelope loop patterns and voila – an incredibly expressive, inspirational and downright fun-to-play instrument! Kontakt multis extend the possibilities by adding another BSG type for layered sound textures or a second instance of the same type with a different keyswitch mapping so that interesting and complex rhythmic textures arise as different note lengths and patterns are played against each other.

If you're looking for an instrument that will let your guitar-slinger solos sound as close to a "real" guitar as possible (or as close as MIDI will allow), look elsewhere. What these instruments will do is provide a fresh and organic rhythmic timbre that is at once unique and familiar. No matter what your style, these instruments will give your compositions a solid edge.

Let's hear it for sound designer art! It's a guitar so it deserves a good pedalboard, right? We didn't want to clutter things up with a bunch of tiny numbers. It's a stompbox… right-click on a switch or knob to assign your favorite controller and start tweaking. There's really nothing too complicated here – everything toggles on and off with a switch. The filter has the standard cut off frequency and resonance controls plus a pull down selector for the type – we've given you high pass, peak bandpass, lowpass and formant types. The phaser has controls for depth, speed and feedback amount as well as phase (0-90 degrees). The flanger adds a "colour" knob. The chorus has the standard depth and speed controls as well as a phase control. The delay has time, depth and feedback controls. The control marked "Pan" is really a pan amount for the ping-pong delay – not a left/right control. The delay time syncs to the host BPM. The Stereo-izer has width and pan controls.

The 1/2-time switch is for use when the host tempo exceeds 150 BPM. One caveat: the switch uses MIDI CC#119 internally, so we suggest that you don't use MIDI CC#119 as one of your controllers. When using a multi with all instances on the same MIDI port/channel, all instances will be switched the same – switch 1/2-time on for one instance and all others will play ½-time.

On the third tab is an Arpeggiator. It's a pretty standard Kontakt arpeggiator with all the standard features. Given that this is a looping rhythmic instrument, an arpeggiator may seem less than useful (why re-trigger rhythmic loops?), but we wanted to include it as a possible option.

WackAss is a dual humbucker Brian Moore i13 strung with D'Addario EXL110 strings and set to the neck position with the tone control rolled nearly off. It was recorded directly to the DAW through an effects chain, which included an Electro-Harmonix Ring Thing and a WMD Geiger Counter. This set is an octave-down monster of mangled guitar – a synth-like texture but with a plucked string driving it to produce a harmonically rich timbre with a wholly organic feel.