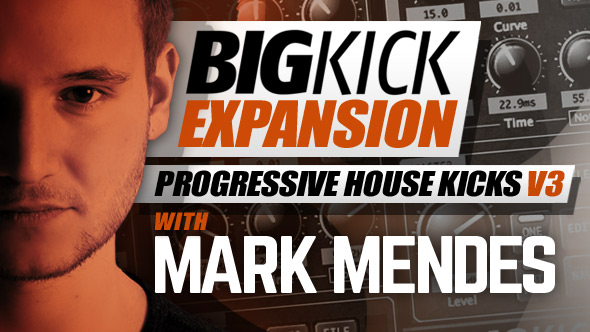 The twelfth BigKick Expansion has been produced by the Beatport no1 producer Mark Mendes.

Having been championed as one of Beatports top producers alongside Avicii, Afrojack and Skrillex, Mark Mendes has been consistently producing storming tracks covering many different genres. His music has been released on Toolroom, Cr2 & Ultra to name a few and receives A-list DJ support from Tiesto, Mark Knight, David Guetta plus many more.

A fan of BigKick since it's release, Mark has compiled a collection 64 great presets which can be used across multiple styles. The expansion has precise, well rounded kicks which can be easily crafted and tuned to sit perfectly within your tracks. Check out the audio demo to hear a selection of these in action.

A word from Mark Mendes

I've created all of these kick drums for you to use in your productions of various genres, trying to use different pitches and tones to give variation and options for all sorts of application. One of the main focal points of creation was to retain low end information and to really make kicks that are heavy, which can be tamed if necessary. I hope you enjoy them.