BigKick Expansion V7 -Tech House Kicks with Jamie Anderson by Plugin Boutique is Soundware (e.g. samples or presets that load into other products). 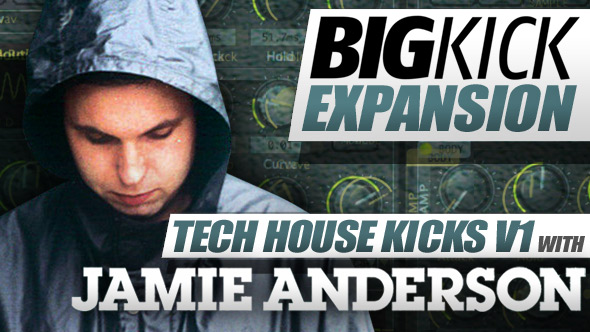 The seventh BigKick Expansion comes from one of the best loved DJ/Producers in the Tech House world: Jamie Anderson.

There are few electronic music lovers that haven't already heard Jamie Anderson's work. He has proved himself as a long-term force to be reckoned within the dance music scene, not only through his own broad spectrum of production talents across the colours of dance music but also from his exceptionally high quality DJ and live performances around the globe.

"...elevating the sound of what Detroit was all about. He's taken it to another level..." Derrick May.

Since it's release Jamie has been championing BigKick within his productions which have featured on Cocoon, Rekids, NRK, Harthouse and his own Artform Records..

'For me the kick drum is the main element that can either make or break a track so having full control over this instrument is vital. The ability to use your own top end kick samples to add flavour as you tweak the body punch and tune the low bass while mixing in some drive and crunch is exceptionally rewarding. Highly recommended!"

At his Berlin based studio Jamie has crafted a pack of 64 Big Kick kick drum presets especially designed for modern Tech House and Techno productions but transferable to all modern dance music.

A word from Jamie Anderson..

'Each attack kick has been proccessed to obtain the right amount of character then each preset carefully tweaked to add a solid bottom end. Sending all your drum channels to a separate bus with an appropriate amount of compression, EQ and saturation will deliver stunning results with these kick drums.'

Simply load in your presets with the new BigKick Preset Manager.