My KVR
String Library by Light and Sound
$299
at lightandsoundsamples.com
DetailsSwitch Section 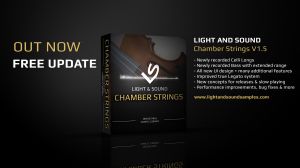 Light and Sound Chamber Strings is a highly detailed and flexible chamber string library (6,5,3,3,1) recorded by expert recording engineer, Debbie Smith, at Windmill Lane, Dublin. A range of exciting and revolutionary techniques for recording longs, as well as freshly conceived scripting concepts allowed the natural dynamic movements of the musicians to be maintained, while remaining playable and intuitive.

Windmill Lane is a uniquely wonderful scoring stage, used on many orchestral, film and TV projects. Utilising the dryness of the room, Light and Sound libraries feature multiple mic positions with natural air absorption. In line with the Light and Sound philosophy which celebrates maximum flexibility, the sound can be shaped more freely than with samples recorded in a more ambient environment.

To recreate the natural bleed of a real recording environment, the close mics of all sections were left open and set at their natural panning and levels while recording each instrument section. The "Bleeds" mic adds a unique and realistic flavour to mockups and compositions.

For harnessing ultimate control over the timbre of all Light and Sound instruments, the "Split Slider" is a groundbreaking new feature which intelligently morphs the crossfading between dynamic layers in real time. Combined with a range of other features found in Light and Sound instruments, you truly have completely control over your compositions: