ChineePipa by Kong Audio is a Virtual Instrument Audio Plugin. It functions as a VST Plugin. 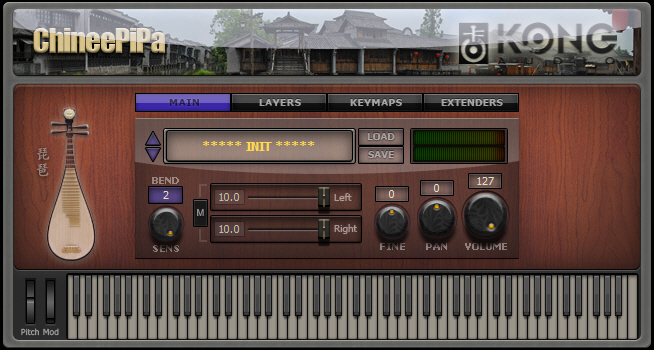 Pipa (Chinese Lute) has its origin dated back to the Qin Dynasty (221-206BC). As Pipa evolved, it was heavily influenced by Persian culture during the Tang Dynasty (618 - 907 AD) when the two great civilizations crossed over with each other, and became one of the most popular instruments in China ever since then.

As Pipa prospered in the most powerful Chinese dynasty, it left tremendous markings in the Chinese literature and culture. Pipa is most well-known for its rapid, successive playing style. A famous quote from a Chinese poem has it nailed: "[sounds like] the pearls, large and small, on a jade plate fall".

ChineePipa contains various types of legato, tremolo, trills, rolls, slaps, and staccato, as well as special techniques, phrases and articulations. The note range is from A3 to D7 (for most patches). It features Modwheel triggered expressions.