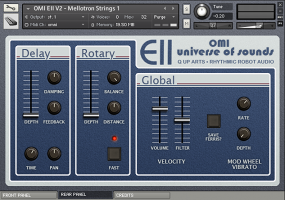 Rhythmic Robot's Emulator II OMI Universe of Sounds library recreates in Kontakt form one of the most highly-regarded aftermarked sample libraries for the Emulator II. The mid-80s Universe of Sounds library comprised well over 1000 patches encompassing everything from orchestral strings, brass, woodwind and percussion, through synths and keyboards, drum kits, basses, and ethnic instruments; and was supplied on twin Winchester disk drives. Building on and supplementing the factory EII library, the Universe of Sounds patches have made their way onto countless chart hits throughout the 80s.

This Kontakt version has been chromatically sampled from a reconditioned EII (ie, every single note of every single patch has been individually re-sampled) so as to preserve the characteristic convertor signature and analogue filter behaviour of the EII. The library has also been produced with the collaboration and blessing of Doug Morton, the original sample creator (and copyright holder), so the recreation is entirely copyright-legal and has passed Doug's stringent quality control.

The Kontakt interface incorporates modern controls over patch behaviour, including a fully-featured modern filter and ADSR, panning, effects, plus convolved period-authentic Lexicon reverb; but these additional controls can all be taken out of circuit with a single button-press if the user prefers the unadorned vintage sound of the EII.

As well as the entire complement of original EII patches, the library contains professionally-designed Kontakt Multis which layer and stack the EII patches into exciting combinations, using techniques and effects not possible on the original machine. This results in more contemporary-sounding patches which still have the EII's sonic fingerprint.

Computer Music magazine write: "Few people know more about capturing the sound of a classic sampler than The Professor, tech-bod-in-chief at sample masters Rhythmic Robot. Sampled soundbanks don't get much more classic than this... the Emulator II's Universe of Sounds [is] one of the most iconic sampler soundbanks in history."

The Emulator II OMI Universe of Sounds library is split into two volumes, Volume 1 and Volume 2, available separately. Both require a full version of Kontakt v4.2.3 or above to run (Kontakt 5 is fully supported; Kontakt Player is not). Full details and audio demos are at Rhythmic Robot – Kontakt instruments with character.