ENGL E646 VS Limited Edition by Universal Audio is a Virtual Effect Audio Plugin. It functions as a VST Plugin, an Audio Units Plugin and an AAX Plugin. 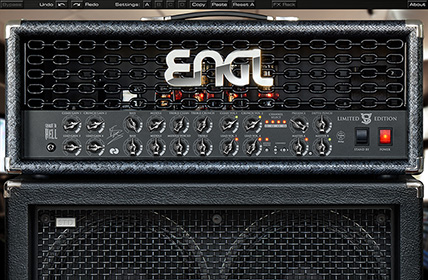 For over 20 years, ENGL amplifiers have become synonymous with high-performance rock and metal guitar tones. With their signature detailed clean sounds and dynamic, molten distortion, ENGL amps power the stages of some of rock's biggest artists. Designed in conjunction with legendary Rage guitarist Victor Smolski, the ENGL E646 VS Limited Edition amplifier has become a modern classic among players looking for a versatile, high-end amplifier that can range from sparkling clean textures to searing high-gain tones.

Developed by Brainworx, the ENGL E646 VS Limited Edition plug-in is a sonic dead-ringer of this ferocious amplifier for your UAD-2 DSP Accelerator or Apollo-equipped workstation.

With four channels, the E646 VS Limited Edition plug-in covers all the bases, and then some. With a Gain control for each channel, you're able to dial in the perfect amount of touch-sensitive responsiveness to your clean and semi-distorted tones. With a twist of the wrist, you can easily add heft to Channel One's crystalline clean sounds, or render some harmonic "hair" around Channel Two's chunk flavors.

Channels Three and Four offer a ton of gain with exceptional string-to-string clarity, allowing your heavy rhythm and lead tones to speak with unparalleled precision and power. The E646 VS Limited Edition plug-in's EQ fine-tunes your sounds just like the hardware version. The Depth Punch control accentuates the thump of a 4x12 cabinet, while the Presence control expertly sculpts your high-end frequencies to musically cut through a mix. You can also hone in on the all-important midrange frequencies for scooped-mid rhythm tones or fat, singing lead lines rife with juicy harmonic detail. Clean to mean and all points in-between, the ENGL E646 VS Limited Edition plug-in injects your studio with a stunning array of firepower.

The E646 VS Limited Edition plug-in offers new tools that greatly add to its versatility when tracking guitars. The FX Rack features an onboard noise gate, host-syncable lo-fi delay, Power Soak, and pre/post switchable EQ filter controls, allowing you to put the finishing touches — before or after mixdown — on your tones.

But it's the E646 VS Limited Edition plug-in's 64 Recording Chain presets that give you the ultimate in flexibility. Captured through Brainworx's ultra-rare Neve VXS72 console, these presets let you audition your sounds through a variety of vintage mics, ENGL cabinets, and outboard gear, including hardware emulations from Millennia, SPL, and elysia. It's akin to an engineer patching you through various chains and mic placements. You can even set this feature to scroll through the Recording Chains in one, two, or four bar increments — allowing you to keep your hands on your instrument while listening to the various flavors.