Haa5 by Apex Audio Technologies is a Virtual Effect Audio Plugin for macOS and Windows. It functions as a VST Plugin and an Audio Units Plugin. 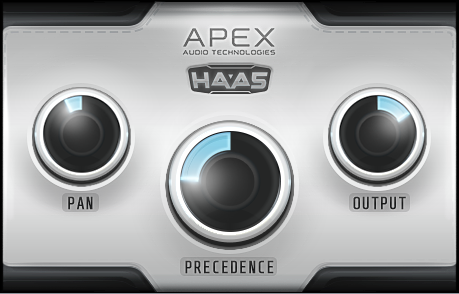 Haa5 uses stereo delays to create what is known as the precedence effect, also known as the "Haas effect" after Helmut Haas who's 1949 Ph.D. thesis first described this psycho-acoustic phenomenon.

This Haas Effect VST / AU plug-in creates a sense of direction by using the system our own ears use to locate sounds in the natural world. By creating a slight delay between the left and right signals the listener perceives a sense of direction depending on which ear hears the signal first. So, if the right signal is delayed, then the left ear will pick up the sound first, causing the sound to seem to come from the left; and vice versa.

We have taken this concept and put it together in the form of Haa5. Haa5 provides an intuitive 3-knob interface to control the pan, precedence, and output volume of the plug-in without needing to interrupt your workflow setting a massive assortment of variables and controls. We couldn't make it any simpler.

Using the Haas effect, one can create a much more attuned and surgically precise stereo image. And, because the concept relies on psycho-acoustics the Haas effect lends itself to a much more natural panning effect than standard volume based panning, which merely adjusts the volumes of the left and right signals separately to create an artificial and less real sense of direction.

Lets see some studio picsby justin3am @ 4:49 in Everything Else (Music related)