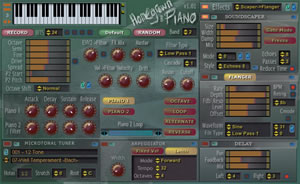 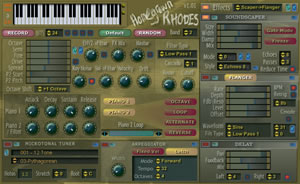 Homegrown Piano by Homegrown Sounds is a Virtual Instrument Audio Plugin for Windows. It functions as a VST Plugin.
Product
Version
1.0
Tags
Tags:Piano / KeysHomegrown PianoHomegrown Sounds
Instrument
Formats
Sample Formats
Loads and/or Saves
WAV
Copy Protection
None
My KVR - Groups, Versions, & More
5 KVR members have added Homegrown Piano to 10 My KVR groups 11 times.
Not In Your MY KVR Groups
(or group limitation prevents versioning)
2 0 I Own This
1 0 Favorites
1 0 I Want This
+7 in private groups

Homegrown Piano is based around 88 samples of a Steinway B Grand Piano which were recorded at medium velocity. It was developed like many other HGSounds products to be great for Ambient/Atmospheric music, though is useful as a standard piano. The 128 presets cover a diverse range of sounds from Standard, Honky Tonk, Bright, as well as many echo landscapes, high resonance/distorted, and synthetic instruments. Though it is primarily designed as a piano, it is still a synthesizer at heart and as a result has plenty of experimental potential.

The plug-in uses 2 duplicate piano layers, the second of which can be manipulated in several ways leading to a diverse range of piano-based instruments. It can be either identical to Piano 1 allowing slight detuning to achieve chorus-type sounds, or relationally tuned by -/+ 1 octave, as well as detuning this will either dull or brighten the sound (for example allowing more harpsichord-type sounds). Additionally the entire instrument can be tuned via octaves, semitones and fine tunings, and can also be positionally shifted -2/+2 octaves which moves the positions of the samples as opposed to actual detuning. Piano 2 may also be Looped (with adjustable loop points), looped back and forth, shifted by -1 octave and reversed.

The piano also features an FX section consisting of Drive, SoundScaper - a reverb/comb/delay effect great for building complex atmospheres, a flanger/filter with a complex LFO, and a BPM-synced stereo delay. There are 3 FX Routing Modes which allows some flexibility in the sound of the FX. There is also an arpeggiator with many modes.

Finally, the piano also contains a microtuner which uses standard scala files, opening up a huge world of custom tuning possibilities, and comes with 300 tunings as standard and stretch/shrink capabilities.

Homegrown Piano B - A second sample set from the Steinway B which was recorded at a harder velocity than the original Piano. The harder attack results in a much brighter sound and as a result has a very different character. It has all the same features as Homegrown Piano but comes as a separate instrument called Piano B. Patches are interchangeable between the two instruments.

Homegrown Rhodes - Also included as a second bonus instrument is Homegrown Rhodes which uses samples from a well worn Rhodes Piano and has one sample per key. The Rhodes had a long history on a cruise ship and was rumored to have been played by Duke Ellington. Some of the keys are in bad condition and the idea was to capture the instrument as is, rather than creating a realistic Rhodes emulation. It has all the same features as the other Pianos but with the addition of adjustable key noises.

I'm first a pianist so I really like the natural piano sound. and I had never imagine before so much possibilities to transform the sound of this instrument.


HG piano is in my opinion a traditional piano, but if you are searching another sound with the character of the natural instrument it's perfect.
you have too a second piano ( piano b more brighter) and a rhodes . these instruments are the same , so you can use the presets for all.

exellent ! the possibility to loop, to reverse etc and to give space with soundscape are endless. the flanger/filter is very good and works very good with piano sound.you can route the different fx , and without tweak anything, have a very different sounds. for texture, motion, fx, and scape this is perfect. it's very good for some lead sound, but with some characters ( string, hammer et).hg piano is unique.

feature
just what you need, so it's very easy to find the sound that you want quickly. i really like the random feature for each section of this instrument. there is too a default button.there is too a microtonal feature, wich is fantastic for piano sound, and motion sounds.

presets
good too. they show the possibilies of HG piano, and are very good basse for new sounds

customer support
perfect! one of the best support I know. andy is a very nice guy , and create instruments with passion.


one af my most used instrument. a real color, and an unique sound. there is no equivalent, and it's in my opinion a master piece.
the demo is the same, the sample are just lo-fi 8k samples and no Microtuner.Read Review