Login / Register
My KVR0Updates
00 items | $0.00 CHECKOUT New
Plug-in Developer?
Search
Who are we in the KVR community in 2020?VOTE NOW
Hyperionby

Hyperion by xoxos is a Virtual Instrument Audio Plugin. It functions as a VST Plugin. 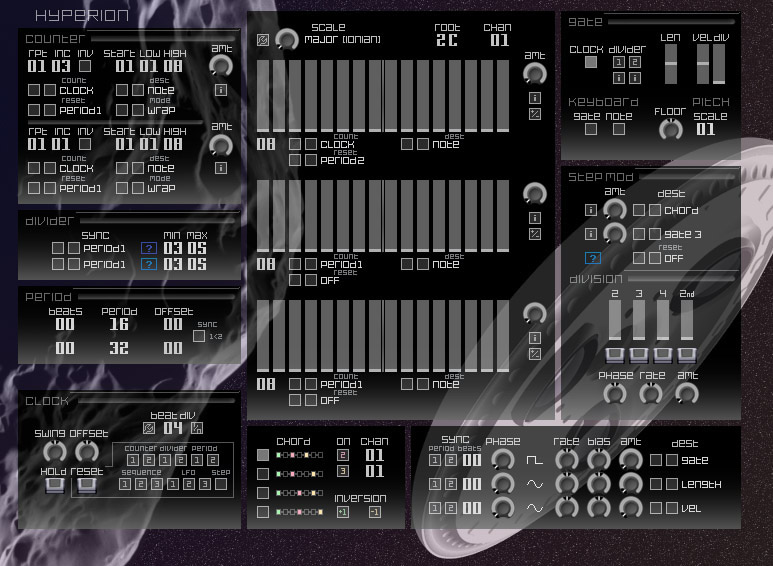 Hyperion is a semi-modular scaled algorithmic MIDI note generator suitable for a wide range of applications from live performance to automated composition.

LFOs, sequencers and counters are used to easily create dynamic MIDI sequences and change them on the fly, or to modulate other components of the architecture.

Hyperion produces glissandos or subtly varying sequences for up to three parts on three separate MIDI channels using a simple chord function. It can also be used as a phrase arpeggiator to make sure that you never play out of key or out of sequence.

Hyperion's architecture is semi-modular, meaning that each component can be driven by a selection of other components precedent to it in the modulation hierarchy. Each component has a source that it counts, and a source that resets it, for instance a sequencer might count measures and be reset by MIDI NoteOn ('gate') events. The output is recallable, and translates between scales and tempos.

Hyperion by xoxos is a MIDI note generator that "invents" melodies and chord patterns.
I tested Hyperion and found it very useful for any kind of accompaniment, bass lines and almost endless melodic variations.
The advanced counters and lfos together with sophisticated cross modulation possibilities and semi-random steppings and measure subdivisions allow for any degree of tonal and rhythmic diversion from repetitive to chaotic.
The three step sequencers (sources for stepping are separately selectable from a rather long list) give a good amount of control over note and chord properties. The 3rd seq is capable of influencing other modulators.
The notes for the played tones and chords can be chosen from a long list of scales from four flavors of pentatonic over all of the modal scales and some rather exotic ones to pure chromatic.
A further modulating subdivision section offers possibilities for grace notes, mordents and trills. This makes for a very realistic playing attitude of natural instruments.

The option for feeding note and/or gate information via MIDI allows for slaving many instances of Hyperion to a common "master line" resulting in euphonic multi-voice arrangements with several harmonized parts.

Hyperion comes with a very good manual that is helpful for understanding this really complex piece of software to a point that allows faithful reconstruction of playing styles typical for a selected instrument and/or genre.

There was some minor issue with a rather big project involving five instances of Hyperion, a MIDI master track and some more oddities. When I reported the problem to xoxos, he was very helpful and his reply email came almost instantly.
Another issue regarding key transpositions on MIDI input was solved the same day I reported it.

Hyperion is a great plugin done by an ingenious developer. I guess I'll use it very often to overcome my "composer's block" and find nice-sounding sequences.

Why I gave it the points like I did:

- The user interface is a bit cryptic and uses selector knobs (scales) or draggable items (lfo waveform) where I'd like drop-downs better. I guess it's a screen space trade-off how it's been done. (9/10)

- When investing some time and effort, this program can "sound" ("invent" notes) almost any way you want it to. (9/10)

- The feature-richness and completeness of modulation target lists more than satisfied me. Great! (10/10)

- Hyperion is well documented. Some unanswered questions got solved by trial and error. (9/10)

- The presets show several of the more intricate features of this program. Apart from this I mostly start with a blank sheet as setting up Hyperion is the individual part in a project. (9/10)

- Stability: There's some minor quirk with this version when running several instances of Hyperion in the same project but nothing that can't be worked around. Sounds are very predictable and can be reliably recalled when re-loading a project. Hyperion has a reset feature to set its seqs, lfos, dividers and counters to a well-defined state before starting a recording session. (9/10)Read more