L3 Multimaximizer/Ultramaximizer by Waves is a Virtual Effect Audio Plugin. It functions as a VST Plugin, an Audio Units Plugin, a VST 3 Plugin, an RTAS Plugin and an AAX Plugin. 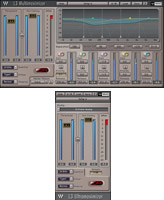 The L3 Peak Limiter consists of two plug-ins - Multimaximizer and Ultramaximizer, which are "Multi-Band Auto-Summing Limiters".

The key to the L3's power is its patent-pending Peak Limiting Mixer (PLMixer) engine. The L3 differs from conventional wide band and multi-band limiters in several ways:

Unlike wide band limiters, the L3 first uses linear phase crossover filters to divides the audio spectrum into five bands. The PLMixer then uses psychoacoustic criteria to intelligently decide how much attenuation to apply to each band so that all available headroom is used. The result is that inter-modulation is minimized and overall loudness is maximized, while brick-wall limiting is still maintained - all while retaining the simplicity of a single master threshold control.

Unlike traditional multi-band limiters, the PLMixer doesn't require a wide band peak limiter to catch overshoots generated by individual band adjustments. Instead, the PLMixer automatically controls the gain relationship between the bands.

The L3's Priority control allows the user to control the relative limiting of each band. This unique control lets users adjust the tonal character of the L3 over a wide range, while maintaining brick-wall limiting.

The L3 allows a 12dB boost or cut in each band in addition to the limiting applied to each band. In effect, this feature functions exactly like a Linear Phase EQ placed before the limiting section of the L3, making the L3 an all-in-one final mastering tool.

The L3 features a linear phase crossover which doesn't introduce phase distortion between the frequency bands. The crossover points are selectable by the user.

While the technology of the PLMixer allows the L3 to be extraordinarily transparent, additional controls allow it to emulate the color and character of vintage limiters. The Separation control, for example, adjusts the independence of each band; when set to 0, the bands do not react separately, and so the L3 functions - and sounds - like a wide band limiter. The Master Release alters the L3's Adaptive Release Control (ARC), offering a Warm, Scaled, Aggressive, and Manual tonal options in addition to the standard ARC setting.

Rounding out the L3's feature set is the Waves dithering and noise shaping section, which delivers the highest perceived quality of sound after quantizing.

The L3 comes in two versions: the Multimaximizer, which includes all of the features listed above, and the Ultramaximizer, which uses the same PLMixer but offers limited controls.

With its transparent operation, brick-wall limiting, extreme tonal range and dithering and noise shaping control, the L3 can function as a complete mastering processor.

After Being sold by the demo, I plurchased the L3 set. What I needed was something to help auto-finalize songs after I had mix em. In the past I had Used The L1 with some results but always had just recieved Limiting and not multiple band Compression to tame a lound bass spectrum or too bright high spectrum that I could not mix out without hurting the mix. Got the same results with the others maximizers also. Ozone seemed like a good choice, Tried that but it seemed that it subtracted something from the mix and so I decided not to got with that. Now that the L# set is out,I happy I got it.I Havent seen any thing of my liking when it comes to a native finalizer. I like the fact that it evened out the freq spec and dymanics and made the song desirable for 2 track. I would recomend that in sound forge 7 and up...to run the Multi maximizer in an effect chain and then apply. Did not have good luck with just preview as an offline plug. Maybe they will fix that in the next vers. Other than that, it was $$ well invested. even though it was Alot.

Sorry for a long review - kept getting an error from KVR saying too short. Ohh wellRead more

The search for the ultimate mastering maximizer is often a tedious task - so many claim to have developed 'The Tool' to help you achieve that modern loudness level - but it never seems to be the case; they're either too expensive or they're simply crap! Yes, they do pump it up - but the quality loss, burned out transients and the "dynamics death" speak of the sad truth.
Well, that was the reality until Waves released L3. It's amazing how audible the difference is - the quality of the original mix is very much preserved, transient detail is fantastic, stereo image outstanding and regardless of the fact that the overall level is drasticaly inreased, the result still sounds spacious and dynamically healthy.
The crossover network is of exceptional quality and the linear-phase design adds up to the overall transparency. The result is a silky, lush and solid sound sparkling with confidence.
There are several release modes implemented which give the user a fine choice of possible settings (the automatic ARC mode seems to be a perfect choice for most types of music).
It's also dead-simple to use, features some innovative stuff (e.g 'band priority') and has a great choice of quality dithering algorythms.
So, if you're still looking for 'The Maximizer' - look no further. This is it! Thumbs up!Read more