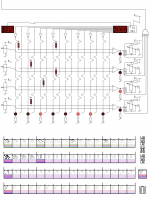 Logique Analogique is a sequencer built around logic functions rather than steps. It consists of an 8-bit binary counter and four tracks which generate pulse waves when a user-defined majority function depending on the counter bits is true. Three-way switches which select the counter bits or their logic inverse and a threshold voltage define the majority function. The output is calculated as the XOR function of the four tracks' signals, which produces a ring modulation like effect.

Running the Logique Analogique app in landscape mode shows the original circuit, while in portrait mode, the app shows an interactive schematic and an arranger. The arranger represents a configuration of the Logique Analogique circuit by using black and grey rectangles for the switch positions as well as colored bars for the tracks' frequencies (where fully saturated colors correspond to semitones on a well-tempered scale tuned to A=440Hz).