Morsing Professional Jaw (Jew's) Harp by GBR Loops is Soundware (e.g. samples or presets that load into other products). 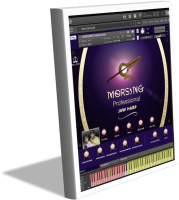 This instrument is mainly used in Rajasthan, in the Carnatic music of South India, and in Sindh, in Pakistan but nowadays due to globalization of the world, the jaw harp is used in China, Russia, Norway, Iran, Germany, France Italy, Hungary, Lithuania.