Pianotrone Virtual Grand Piano by Syntheway Virtual Musical Instruments is a Virtual Instrument Audio Plugin. It functions as a VST Plugin, an Audio Units Plugin and a VST 3 Plugin. 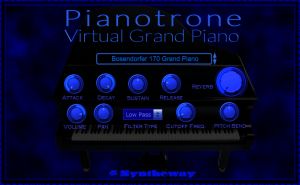 A while back, I needed an inexpensive piano in a hurry, so bought this without testing it properly. I wish I had tested it.

Allow me to explain my marks:

GUI: functional but cheap-looking. Not too bothered either way.

Sound: The sound is pretty bad. The consistency between the samples is terrible. Some notes never decay, and continue to loop while the note is on. Other notes eventually decay fully. The loops are sometimes very bad, with very obvious loop points (especially apparent in the never-ending notes...)

Features: It's a piano, that's about it.

Docs: Enough to get you started, and it's simple enough to understand for yourself.

Presets: Lacking a large preset library, but what do you expect for a piano?

Customer support: I emailed the maker about the never-decaying samples and the bad loops, and sent audio examples. I was hoping this would be fixed. After that, I never heard back from the maker. If the problems were fixed I was never told, and I certainly never received an updated plugin with the loops and decay fixed. They have an FAQ and boast free 'technical support', but seeing as the glaring quality issues have not been resolved, and I have not heard back from the maker (nearly a year since I reported the issues) I have to be harsh.

Value for money: Since using it that once I have never used it again. I would advise people to not bother with this plugin even if it was freeware (there are better freeware pianos about), unless the plugin is drastically fixed and updated.

Stability: It never crashed, but it certainly doesn't behave like I would expect a piano plugin to.

Overall, I just wish I had tried the demo before buying, because I certainly wouldn't have spent $35 on this if I had.Read more

I had the chance to play with this, and I first thought that it must be a joke.

"Realistic Piano" - oh my god! Did this guy never hear a real piano? A Casio keyboard from five years ago had better piano sound built in!

If you know MDA-Piano and you think, you need something better, forget about this one. It sounds like a toy piano that has to be tuned. Even as a freeware I would not install it; sorry.

There are many soundfonts for free to be found in the Net that are better. It's far away from the free MDA-Piano. I was really surprised that someone is charging money for this.

I don't know what I can write more here.
It's out of tune.
There are sound-jumps between the key zones.
It sounds thin.
It sounds strange.
It is not useable in a musical content.
It is not worth any money, sorry.

Other things from this author like Magnus Choir may not be so bad, But for the piano I am speechless. But I must write more to fill this field.Read more

Average user rating of 1.50 from 2 reviews