Rap & Hip Hop I & II | Hard Beats for Rap and Hip Hop by Beta Monkey Music is Soundware (e.g. samples or presets that load into other products). 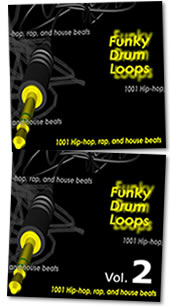 Over 2600 drum loops for rap and hip hop on 2-CD's for ONE low price! With beats ranging from 62 BPM to 151 BPM, the special 2-CD set will give you, pound for pound, more fresh, original, and license-free loops than you could believe possible for the package price.

If you want your hip-hop and rap loops to have ass-shaking kicks, popping snares, and syncopated rhythmic goodies, then this 2-CD Set is for you. These kick drums are stomping and funky! The grooves are slamming and give you beats for days for today's rap and hip hop music.