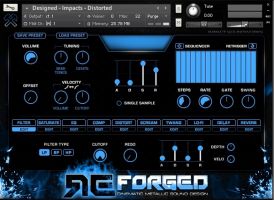 The Natural instruments include dozens of found metal objects played with various tools and techniques, recorded with many dynamic layers and intimate micing. Instruments range from bath tubs and metal sheets to tonal gas canisters, cookers, cowls, gardening implements, and more. The Designed sounds morph this material into a range of modern elements such as cinematic impacts, atmospheres, textures, and FX.

In essence, the Natural sounds are multisampled percussive instruments offering exotic and unique timbres, while the Designed sounds are heavily processed one-shot material.

ReForged also features an advanced Kontakt interface with dozens of internal presets and templates. The interface can be used as a synthesizer with filter + FX, envelopes, EQ, an arpeggiator/gate, and other tweaking controls. For sound designers who want to mangle the audio further, the entire library is presented as WAV and REX2 (for any rhythmic material).

ReForged: Cinematic Metallic Sound Design is available for the introductory price of $119 through January 15, 2014 (MSRP: $139).

Listen to Demos on SoundCloud