Ruby by Acustica Audio is a Virtual Effect Audio Plugin. It functions as a VST Plugin, an Audio Units Plugin and an AAX Plugin. 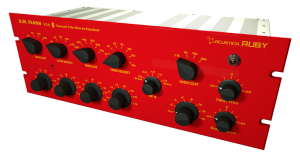 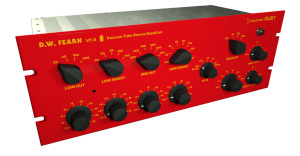 Ruby is as an official endorsement and a faithful plug-in representation of the D.W. Fearn highly sought-after vacuum tube equalizer VT-5. The original hardware equalizer uses passive LC circuitry with class-A triode vacuum tube stages for the input and output. The input transformer is made by Jensen. The output stage utilizes the same custom Jensen transformer used on the VT-1/VT-2 mic preamps.

NOTE: The latest version of Ruby upgrades the plug-in to Core12 and brings the benefits of our Super Transient Technology to it. What this means in simple terms is that Ruby now sounds event better than in its first release! In addition, in the latest update there are both the normal and HD versions included. The HD version is intended for mastering and provides even closer to the hardware sound. As expected, the HD version is more CPU demanding. As we feel that the added benefit of it is not something that will be audible in all cases, we decided to provide both options. This update comes free of charge to all customers.

Acustica Audio's plug-ins are based on a unique for the market cutting-edge non-linear Volterra series convolution. This means that they are build of dynamically captured samples of the original hardware gear.

Most of Acustica Audio plug-ins come with a "Preamp on/off" function. With it "on" the plug-in recreates dynamically the pass-through sonic coloration of the original unit (all EQ knobs at 0 gain). This includes the harmonic distortion behaviour of the hardware, the introduced phase shift and any frequency response deviations. With it switched "off" the plug-in offers a much "cleaner" and more linear sonic character than the hardware.

As with the preamp on gain staging into the plug-in behaves similarly to hitting the original unit at different input levels, Ruby comes with an "Input Trim" control. This allows for a "one knob" internal gain control, by hidden linked input and output gain stages. When a positive value is selected the signal entering Ruby is brought up by the set amount in dB at the device's input, and it is brought down by the same level at Ruby's output. Contrary to this, negative values result in lower internal operational levels compensated at the output of the plug-in.

The "Output Gain" control provided allows for matching the original loudness of the source material after applying equalization.


Preamp Section:
• Preamp: on and off.

About Acustica Audio:
Acustica Audio as a company is active both in the field of information technology (IT) and audio engineering. Within the world of audio the company's goal is to provide both the most authentic reproduction of vintage and other high-end audio gear, and the development of new original hybrid processors - all based on sampling.

Over the years Acustica Audio has become well known for its audio plug-ins, which are based on unique for the market non-linear Vectorial Volterra Kernels technology. An analogy could be drawn between an audio sampler (an electronic musical instrument able to capture and reproduce audio samples) and our proprietary plug-in engine, which allows for based on sampling modelling of various audio processors and systems, such as: EQs, filters, circuit distortions, compressors, expanders, reverbs, echoes, flangers, loudspeakers, clippers, etc.

About Nebula and Acqua Effect plug-ins:
Nebula is Acustica Audio's sampler plug-in able to load external sample libraries of various sound processors. An Acqua is a stand-alone plug-in based on skinned collection of Nebula libraries with added routing and control functionalities. Aquas are developed by combining one or more Nebula's instances. This process called 'parametrization' is achieved by using script languages proprietary to Acustica Audio and does not require external tools or compilers.