BUYING! X Checkout $154.00Buy Now!
Saturn by FabFilter is a Virtual Effect Audio Plugin. It functions as a VST Plugin, an Audio Units Plugin, a VST 3 Plugin, an RTAS Plugin and an AAX Plugin. 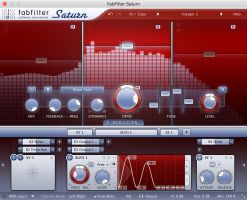 FabFilter Saturn offers a wide range of high-quality distortion models from subtle, clean and warm tube or tape saturation to fully overdriven vintage guitar amp simulation. Additional creative distortion styles let you time-smear, stretch, crush, rectify and clip your sounds in inspiring and unexpected ways. Create up to six bands with individual feedback, compression/expansion and tone controls to give each part of the spectrum the warmth and color it needs.

To bring even more life and depth to your sound, engage FabFilter Saturn's extensive modulation section. By applying subtle modulation to crossover frequencies, dynamics, band levels or tone controls, you can add unique definition and flavor. With practically unlimited modulation sources from XY controllers and programmable step sequencers to any type of MIDI data, the creative possibilities are endless.

The user interface makes FabFilter Saturn look deceptively simple, showing only the controls that you are actually using at the moment. The entire modulation section is hidden by default, resulting in a friendly interface that invites you to explore the essential controls and the included factory presets. When you need to look "under the hood", a single click expands the modulation section, letting you easily add modulation sources and create modulation connections via drag-and-drop. This combination of features makes FabFilter Saturn powerful and flexible, yet ultimately accessible for everyday use.

Learn how to use Saturn... in KVR Learn

Sendy, this is one of the few plugins that really DESERVE a frakking 10. My demo period lasted a couple of days, and after fighting it and fighting it ("not another sat unit, come on, you don't need it"), I succumbed. Saturn is now residing in the box labelled "not even from my cold, dead hands will you pry these".

nice informative well-written review Sendy, cheers! Just picked this up in the FF sale but haven't had time to play with it yet... can't wait!!

Good review. Saturn fully deserves a 10 in every way, i agree :)

I agree on all counts, Sendy.

Thanks for all the nice comments about my review. I really felt this plugin deserves a 10 and a review on this site, but not only that, a good explanation of WHY it ends up on ALL my tracks!

Yes, it is [b]that[/b] great. I've just discovered it recently when I was looking for great saturation/distortion plug-ins. One of the best, if not the best, there is. Price is a bit steep, though, but when you realise how much you've been using it, and you will, then it doesn't look so steep any more.

I have to say that Saturn is really great and use it more and more often! :)

Saturn gets 10 from me also.