Sick vol. 2 by Soundiron is Soundware (e.g. samples or presets that load into other products). 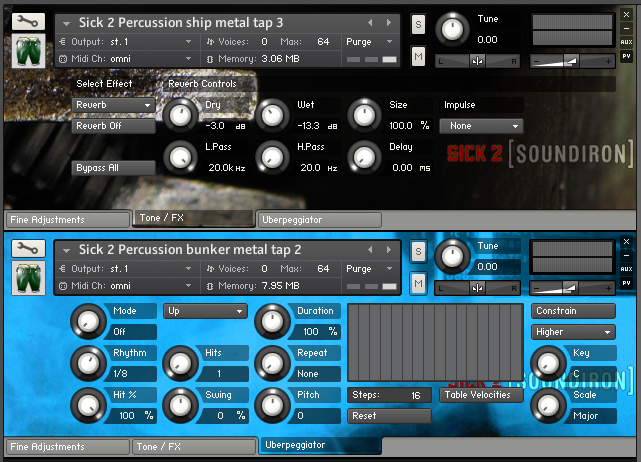 Designed with Halloween in mind, this library is a one stop shop for eerie and disturbing paranormal sound-design, including subterranean clanks, booms, thuds, cracks, drags, stomps, steps, creaks and thumps in the darkness; demonic creature howls, moans, breaths and growls; hellish and twisted soundscapes, pads, drones and ambiences; and a variety of terrifyingly vivid EVP recordings (some of them quite real).

To capture the raw materials for this sonic descent, we explored the bowels of an abandoned Civil War/World War I-era naval artillery bunker (mind you, not the same bunker that we visited in Rust II – I guess you could say we love us some abandoned bunkers.) and a World War II/Cold War-era decommissioned warship.

We've included some awesome control features and built-in effects to let you shape every aspect of the sound in real-time within Kontakt, or you can simply grab the WAVs and mash them up however you like.

You'll notice that all patches in this library include automatable custom front panel performance controls including Attack, Swell, Morph, Release, Offset, Stepping, Key Switch On/Off toggle button. Not all controls are featured in all patches.

Native Instruments Kontakt version 3.5 or 4 full retail version of Kontakt required to use all .nki instrument program presets included in this library. The free Kontakt "Player" does not support this library.

My KVR - Version Control & Lists
Not In Your MY KVR Groups
(or group limitation prevents versioning)
11 people have added Sick vol. 2 to 4 My KVR groups 11 times
8 0 I Own This
1 0 I Want This
1 0 Favorites
+1 in private groups