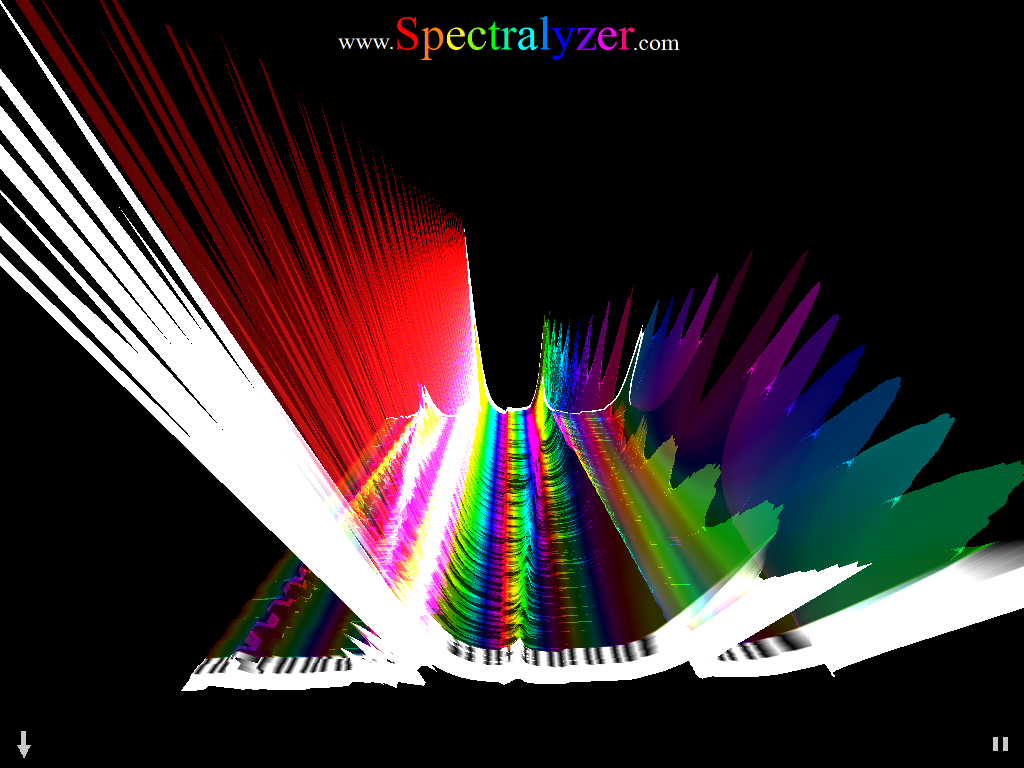 As such, it is a colourful and informative way of "seeing" the frequencies present in sounds, in a way that seems to resonate with how we hear.

The Spectralyzer displays sound as a continuously changing, 3-Dimensional, rainbow coloured visual landscape, created by the frequency content of sounds being detected by an iOS device.

The Spectralyzer is a piece of synaesthetic interactive art, constantly changing according to the acoustic environment.

The Spectralyzer, created by musician / producer / audio / software / systems engineer / obsessive nerd Martin P Simpson, was born whilst listening to music, dancing and thinking about life, the universe, Fourier analysis, and, having just been introduced to it, Sinusoidal Additive Synthesis.

As a result of Martin's somewhat obsessive nature, Sinusoidal Additive Synthesis took over his mind.

He therefore found himself visualising the music he was listening to in a club as a surface of sine waves travelling towards him, the different frequencies spread out like the keys on a piano.

He, then realised that viewing sounds in this way would have made a powerful tool during his career as an Audio Engineer.

And so began a quest to develop that idea into a piece of software in order to better understand sound, music, language, hearing and many more things beside.

Whilst we make no guarantees(!), you can use the Spectralyzer as an Audio Engineer's sanity checker.

Using it can help you "see" things you only thought you could hear.

Apart from just being cool to look at, careful use of the Spectralyzer can only help move your audio perception skills towards that of those legendary Engineers. Those who's ability to understand audio gives them the label "Golden Ears".

If you are involved in any form of sound production, those are skills you need.

The underlying maths in the design of the Spectralyzer does not use the mathematician's standard tool, the Short Term Fast Fourier Transform (STFFT).

Instead, with some help Martin returned to the maths that, during the final year of his electronics degree many years ago, moved him away from electronics and opened him up to the world of Digital Signal Processing for digital modelling of analogue electronic systems.

For which, many thanks to Professor Ifeachor.

This resonant filter based approach seems to be a better model of resonant nature of our cochlea than the STFFT.

At the very least, imaginary numbers are left to coefficient calculations, where they are a useful trick, and left out of the actual analysis...

In its current version the Spectralyzer has 12 filters per octave, one per well tempered semitone, calibrated to A440.

Each semitone is represented by a different colour of the rainbow. The rainbow repeats each time the frequency doubles, or every octave.

A440 is bright red for an easy reference frequency familiar to musicians. "Red" one octave above this reference is 880Hz - one octave below is 220Hz and so on.

The 3-D surface can be viewed from different angles by tilting the device. It can also be moved and zoomed using touch/pinch gestures.

The 3-D surface generation can be paused using the pause/play button for a more detailed examination of a particular sound.

When running from the device microphone, the Spectralyzer provides an intuitive view of the frequency content of the surrounding ambient audio environment, limited only by the frequency response of the device's microphone.

With the addition of the Apple Camera Connection kit, digital audio USB devices can be connected to the iPad. This turns the Spectralyzer running on the iPad into a more serious audio analysis tool, removing the limitations of the in built microphone frequency response by feeding it with digital data.

The Spectralyzer iOS App is available from the App Store.

I say hell yeah!!! I've been looking for something like this... For Windows please.