Steam by xoxos is a Virtual Instrument Audio Plugin. It functions as a VST Plugin. 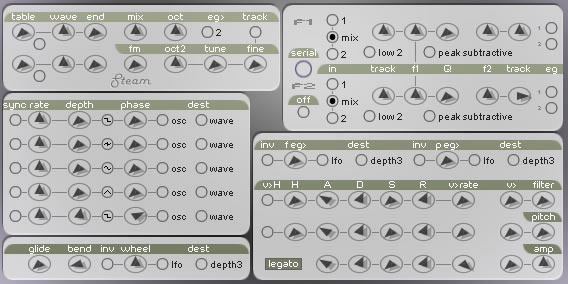 Steam is a "Fizmo-alike" wavetable synth with two 'scannable' table-based oscillators and two multi-mode filters that include a variety of sideband modes to take advantage of evolving timbres. It is optimized for dense shifting, motile, 'organic'/noisy, chaotic textures.

Steam is available as a VSTi for Windows in two versions - the free version is monophonic, the full version costs US$20 and allows 6 voices of polyphony.

You'll all be wanting to know, is this synth something to hold in high e(Steam)?, or is it a (Steam)ing pile of pooh? well read on to find out.

Steam is a wavetable type synth made with Synth Edit and inspired by Ensoniqs Fizmo hardware synth. The standard edition has 6 voice polyphony. It has 2 wavetable oscillators which can be frequency modulated, and also allow you to import your own specially tailored wave files.There are 2 filters that can operate in serial or parallel and some fancy filter options with features that differ from the norm. They have extra features that operate in sideband mode comparing 2 filter poles and performing operations on the 2 readings. This gives peak additive, subtractive, phase, differential, divergent, pole shift and pole swap modes in addition to more standard modes! This adds extra sound potential to an already very quirky synth.
It has a 5 row LFO mod matrix with many different mod destinations. There are also options to route the filter and pitch envelopes to second destinations, either as they are or inverted. All envelopes have velocity mod of amount and rate. It has poly, mono and legato modes.

The synths sounds alive, it can give very wild textures and can easily sound unstable, like its going to go into a strop and throw a mental :) You can have a stab at more conventional sounds with it by either putting more standard wavetables in or just using one cycle of the wavetable etc, but this would be missing the point of this synth. It sounds very individual, it has character in abundance. If you like synths to sound like synths, and not piano's or bagpipes etc then you'll likely get something out of this synth, just dont expect it to replace your GM soundset!

With most things there are always things that could be improved. With this synth it would be reassuring to have something to indicate some of the value ranges for parameters, and would certainly help to start off with. You will also benifit from reading the manual, but that should be obvious.The manual does explain most of the main features but doesnt cover everything. It has fairly high CPU use, but if you watch the release times (alot of the presets do have long release times) it should be ok for most. It would be great to be able to choose polyphony setting, but it seems Synth Edit cant do this as yet (I hear it might be coming in future though). It has different character and feature set to Kubik (another wavetable based VSTi), I like both and there's plenty of reason to own both if you like wavetable sounds. YOu can get a mono version of Steam for free to try as a demo.

All in all this is a great synth thats full of character, the developer Mr Xoxos gives great support and its selling for a low price of $20, though I think there will be a group buy on soon that will give the opportunity to get it for $10!! If you see it going for that sort of money you would have to be a GM sound set loving fool to pass it up :)
So to summarise, it isnt a (Steam)ing pile of pooh!Read more