Login / Register
My KVR0Updates
00 items | $0.00 CHECKOUT New
Plug-in Developer?
Search
Who are we in the KVR community in 2020?VOTE NOW
The Sound Of Wretch 32 & Knox Brownby

The Sound Of Wretch 32 & Knox Brown
by Prime Loops

The Sound Of Wretch 32 & Knox Brown by Prime Loops is Soundware (e.g. samples or presets that load into other products). 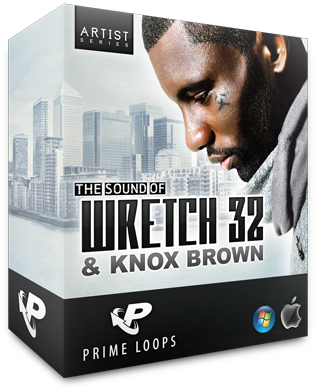 It's time to lift the curtains on this stunner of a sound library: For the latest addition to our Artist Series, Prime Loops is proud to present "The Sound Of Wretch 32 & Knox Brown".

Wretch 32 had three top-five charting songs from his Gold-Certified album Black in 2011 alone. This year he became one of the main faces for both Adidas' and Coca Cola's London Olympics campaigns and also won 'Best International Act' at the BET Awards.

One of his steady collaborators in these last years is the experienced producer and all-round studio wizard Andrew Brown, better known as Knox, with whom not only Wretch 32 works frequently. Knox is one busy man these days, composing, writing and producing for artists like Bashy, Daley, Lady Leshurr, Wiley, Kano, or even Vince "The Voice" Kidd.

Together they have crafted a star-studded Prime Loops sample pack containing a whopping 10 Song Kits, boasting a wide range of mixes at 72-134BPM to tailor an abundance of flow patterns. All the 24-bit files within this royalty-free collection have been split into individually optimised tracks, all ready to instantly expand your versatility and creativity. Expect booming bass kicks and super-clean claps, combined with orchestral keys and dramatic melodies, typifying that authentic London sound.

So grab this winning formula blend of innovative sounds and rhythms that take as much inspiration from what's bubbling in the UK's metropolitan underground as from what's ruling the pop charts. Contemporary R&B, UK Grime, even borrowing a lick or two from the dominant indie music scene and transforming it into something different altogether – "The Sound Of Wretch 32 & Knox Brown" will arm you with the needed tools to do as much damage in the headphones as it will in the charts and clubs.

The Sound Of Wretch 32 & Knox Brown