U.F.O. Zone Edition by VST Zone is a Virtual Instrument Audio Plugin. It functions as a VST Plugin. 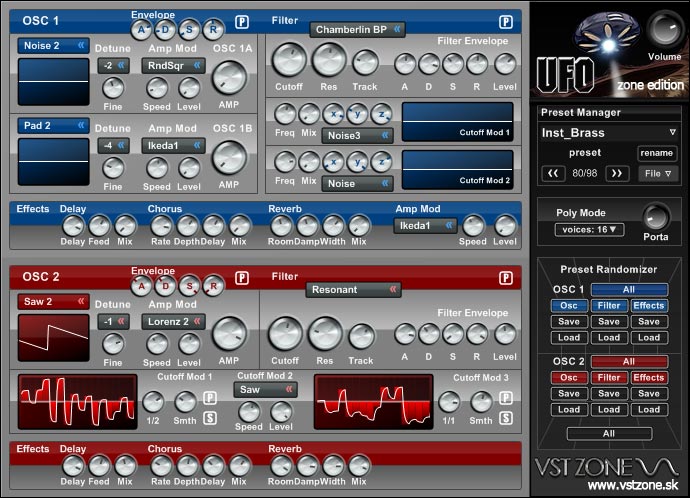 U.F.O. Zone Edition is upgraded version of original U.F.O. plugin with some updates, improvements and fixes. It is a subtractive synthesizer with three oscillators. Two of them have mutual filter, in which the frequency of oscillators is modulated by two LFOs. Third oscillator has independent filter, in which the frequency is modulated by three LFOs, two of which are graphical. Final sound is adjusted by kit of effects (delay, chorus, reverb), which is applied for each group of oscillators apart. Our intention was to reduce CPU usage and to make clean and simple user interface. U.F.O. ZE includes many presets, which can be extended by preset randomization function. Additional presets can be expected in future updates.

Notice: Presets from previous version are not fully compatible with new version because of new features incorporated in this update. If you already created your own preset with previous version you can send it to us and we will convert it for you. The same difference is between new version 1.2 and its special extension.

Demo music made with U.F.O. ZE (7 instances) and Amplio 2
https://soundcloud.com/trojakew/disorder

Just saw this company mentioned on the Omnisphere 2.6 thread. This is a synth worth checking out - for the price you can't beat it, mainly because it doesn't sound run of the mill and the presets are interesting, with a few that actually work well combined with other synths, to make beds of various sounds. Thanks guys - along with Eclipses which is another worthwhile free synth - great work.

For a freebie this a huge sounding synth. Very usable presets to get you going, lots of modulation capabilities, great FX ................ and better than the previous version, which was also amazing but had some minor annoying bugs. I love it ! Thank you VST Zone ..................... Oh and check out Amplio by these guys.... awesome reverb, distortion and much more.