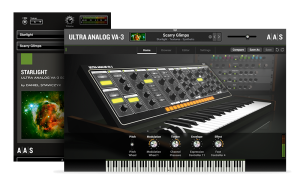 Starlight lands with sounds collected at the confine of the galaxy. Indeed, the 149 presets scattered across ambient, arpeggiator, arpeggiator bass, chime, effect, keys, lead, rhythm, and synthesizer categories breach into the outer space for an impregnable intergalactic landscape. Whether you want to teleport your music into another dimension or simply leave for an orbital spaceflight, Starlight is your ideal shuttle.

Poland based Daniel Stawczyk aka Status is a sound designer collaborating with numerous software instrument developers and has released over 30 nicely received sound sets. Let alone hundreds of presets for factory sound banks released along with the premieres of several instruments worldwide.