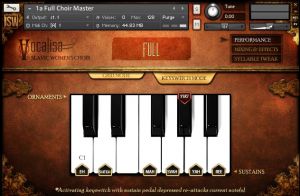 Vocalisa: Slavic Women's Choir by Impact Soundworks is Soundware (samples or presets that load into other products).
Product
Version
1.0
Tags
Tags:ChoirFemaleImpact SoundworksKontakt InstrumentVocalVocalisa Slavic Womens ChoirWomens Chorus
Soundware
For
Native Instruments Kontakt
Soundware
Formats
Kontakt
Copy Protection
None
My KVR - Groups, Versions, & More
20 KVR members have added Vocalisa: Slavic Women's Choir to 5 My KVR groups 21 times.
Not In Your MY KVR Groups
(or group limitation prevents versioning)
12 0 I Own This
4 0 Favorites
3 0 I Want This
1 0 My Actual Studio
+1 in private groups

The style of Slavic singing in Vocalisa was popularized through albums such as Les Mysteres de voix Bulgares, as well as the soundtracks to TV shows and movies like Xena: Warrior Princess and Ghost in the Shell. Its sound is unlike traditional Western choirs, using a different set of syllable combinations, tight harmonies and dissonance.

The content of Vocalisa is built around detailed & authentic recordings of the choir and its sections, split into important syllables: eh, may, yah, ree, shteh, svah, oh, and yik. Mordents, turns, clusters, FX (claps, noises) and breaths are also included. The modwheel is used to trigger the entire range of choral dynamics, from the quietest sotto voce pianissimo to the loud, brassy fortissimo that Slavic choirs are known for.

Vocalisa provides two methods of playing, with a focus on ease of use - a "Grid Mode" lets composers select a sequence of syllables and ornaments, which are then played back in order. The "Keyswitch Mode" allows greater control by assigning each syllable and ornament to a separate key, with sustain pedal-triggered "smart-switching" between syllables for a seamless and fluid performance.

The included script also features tools such as reverb, compression, EQ, stereo widening, and syllable tweaking, where advanced users can adjust offset, volume, and brightness for each syllable.

Vocalisa is available exclusively from Impact Soundworks for a list price of $129.