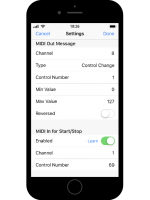 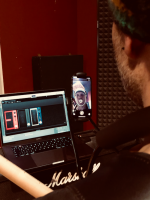 Using your camera instead of an expression pedal or MIDI controller knob provides the ability to use any external AudioUnit/VST effects in a whole new way.
Now you can control the VST plug-in settings in real-time without using your hands.

For Guitarists
Why not to change the plug-in parameters in the Amp Simulator while playing using your lips?
Now the wah-wah pedal or any other effect will be within reach of your iPhone.

For Keyboardist
You don't have an expression pedal slot on your keyboard?
Now you can use the Wah-Wah app to control volume, modulation, pitch or any other parameter hands-free. You get one more place to work with effects.

It is a fascinating step into exploring accessibility in music-making.
You will discover that our face controller may be more intuitive and easier to learn than a foot pedal.

MIDI Connection Guide (also available from within an app).

Anyone who plays the guitar and uses a wah pedal often mimics this characteristic effect with their lips.

This app does something incredible. You don't have to use the pedal, just make this effect with your lips and the application will read your lip movement.

Of course, this works only with the wah-wah VST plugins, which can be found in any decent DAW. The application turns the mouth into a MIDI CC stream - it is not a plugin that modulates the audio signal.

It works virtually without any latency - I tested it with a Wi-Fi connection to a Mac. You can also configure Bluetooth and connect directly via a lightning-USB cable, but I haven't tried these connections.

The speed and precision are especially impressive in the TrueDepth camera mode for the iPhone X and later versions.

Unfortunately, this add-on is not free, but it costs only $5.

The free version using a standard camera works noticeably worse, but it still does the job.

In addition to CC, pitch-band and after-touch modes are also available, although they seem less useful. You can also "calibrate" the range of motion of your lips.

I haven't tried using the application with an external MIDI controller, something in the opposite way - it's possible to start-stop the face tracking itself. It can be quite useful when you want to enable/disable the effect by pressing the button or pad.

To comfortably use the application while playing the guitar, it is good to have it on a phone neck holder (there are quite a lot of them on the market), or on a small tripod in front of you, but it will work only for keyboard players who sit more or less in one position and do not sway;).

I imagine that not only the lips can be tracked - you could probably turn effects on/off by blinking your eyes, but then it would be more of a toy, and this application can work in normal playing, even live! It will definitely impress the audience.